HPC in the cloud

Currently, most projects requiring HPC are still running on legacy UNIX® systems. Migrating these projects to a cloud-based installation is very simple and does not require much additional setup. This tutorial builds an HPC cluster with Open MPI on the Rackspace Cloud and runs an Open MPI application on top of the cluster. By the end of this tutorial, you should know how to leverage the cloud to rapidly build and scale an HPC cluster for real-time data processing while removing the dependency on physical infrastructure.

To achieve high performance clustering in the cloud, you can use Open MPI, which is an Message Passing Interface (MPI) project. It provides parallel processing, thread safety and concurrency, dynamic process spawning, and network and fault tolerance. The world’s fastest super computers use this library, and the library powers many petaflops. To find out more about the Open MPI library, visit their site.

This tutorial shows you how to build an HPC cluster by using the following tools:

The tutorial sets up a four-node cluster, runs an application on it, and gauges the performance, as shown in the following image: 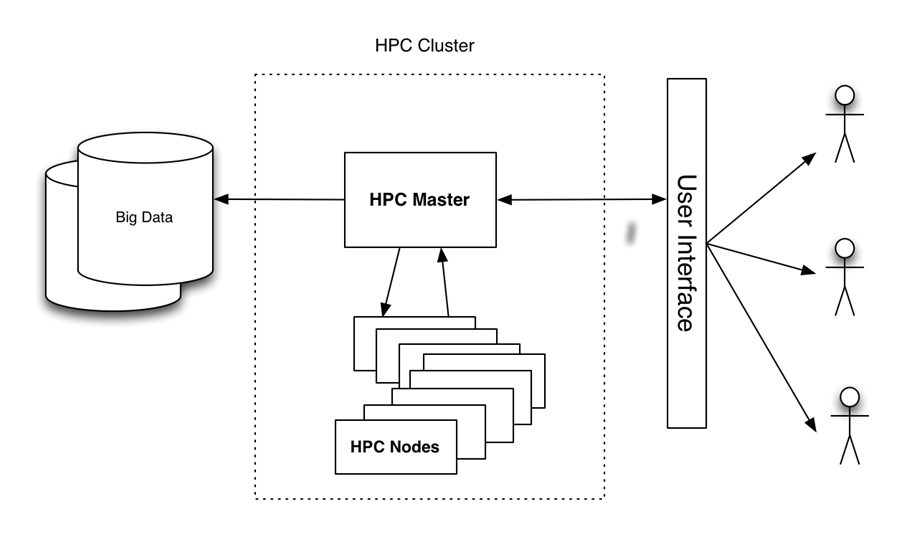 You need the following three items to successfully complete this tutorial:

The tutorial covers the following tasks:

Log in to the Cloud Control Panel and create a Cloud Server from the web interface with the following attributes:

Click Create Server and the Cloud Server build process begins. While it builds, a popup window displays your Cloud Server password. Record the password for future reference. Dismiss the popup window and wait for the server build to complete. After the IP address of the new server becomes available, record it.

After the server finishes building and is in Available status, SSH into the server and log in by using the IP address and password that you recorded earlier.

After logging in, execute the following commands to install Open MPI:

Open MPI facilitates communication between nodes by using SSH, so you need to enable key-based logins for SSH.

To do this, run the following commands:

The output of these commands should look similar to the following example:

Note: You are prompted for a passphrase during this process. Leave it blank.

Run the following commands to copy the key to the authorized key folder and change the permissions to allow SSH logins:

Now configure the primary HPC node by creating a host file. To do this, ensure that you are logged in to the first node over SSH and create the following file, where <Your Server IP> is the IP address that you used to SSH into the machine:

To verify the file, run the following command:

You should see the following result:

To verify your configuration, use hello_c.c from the examples included with Open MPI.

This should output the following result:

Now that it works, run the following commands to test connectivity:

This confirms that the first node is online and operational.

With the first node created, you are ready to set up a cluster. To begin, make copies of the node that you just created. Follow these steps to create an image:

After the image is created, deploy a new Cloud Server by using the previous procedure with the following exception: when prompted for the image, click the Saved tab and select your image. Again, provide a meaningful server name and record the password and IP address of the new server.

To add the new node to the cluster, run the following commands (assuming that the IP of your new server is 10.20.30.40 and the IP/hostname of your first server is <Your Server IP>):

Now, your host file should resemble the following example:

To test the connectivity between the nodes, execute the following command:

If you don’t get any errors, you have just successfully created and tested your own cloud cluster. To increase the size of the cluster, add two more nodes by using the same procedure.

To test the connectivity within the four-node cluster, execute the following command:

First, install the application on all nodes of the cluster. To do this, SSH into the primary node and run the following command:

The Tachyon Parallel/Multiprocessor Ray Tracing System comes with multiple sample data files in the scenes folder, which you can use to run your tests. First, run the test on one node by using the following command:

Run the following command and notice the ray tracing time so that you can compare it to your parallel run:

Your cluster consists of four nodes and one CPU for each. Therefore, the performance improvement is almost four times greater. You should see significant improvements even if you don’t have multiple nodes and instead run your application on only one node with OpenMPI using both CPUs.

It is important that you created your server with at least 2 GB of RAM because sizes of 2 GB and higher have access to at least 2 CPUs. For more information on sizes, see Cloud Servers.

Execute the following command to run this code on multiple CPUs of a single server:

Notice that even when running on a single node but utilizing Open MPI, the performance has almost doubled. To read more about this ray tracing application, visit https://jedi.ks.uiuc.edu/~johns/raytracer/.

In this tutorial, you learned how to create and image Cloud Servers. You also learned how to set up an HPC cluster using Open MPI. After setting up and configuring the cluster, you installed a small ray tracing application to demonstrate the benefits of using multiple nodes instead of one node.