Use the Oracle Database refreshable clone feature—Part One: Introduction

The Oracle® Database 18c for Enterprise Edition on Cloud bundles engineered systems (Exadata) with many new and improved features. Release 18c improves the refreshable clone feature from the 12c release 2 by adding a quick switchover or failover facility. You can also create a snapshot carousel to clone or replicate pluggable databases (PDBs) in a multitenant environment.

For production environments, use a snapshot carousel with the refreshable clone PDB feature to make database administration (DBA) activities easy, such as safeguarding against an unforeseen outage or troubleshooting logical corruption issues. This post describes the practical use of refreshable clones with manual and automatic switchover cases. You can use it with the snapshot carousel feature to identify and handle the following database health problems:

This post is part one of a two-part blog post series. Read on to learn about the refreshable clone PDB, how it works, and when to use it.

The second part of the series describes how to create, configure, maintain, and drop a refreshable clone PDB.

This section provides answers to some basic questions about clone and snapshot carousels.

When you clone an instance, you take a backup of it and restore the backup elsewhere. Typically, you restore it on another machine with the same directory structure. You can also restore it on the same machine by changing the Oracle System ID (SID) and the database name. You can use a clone of a production instance on a test machine to try out what-if scenarios, such as changing the init.ora parameter or altering your code, and so on.

How does PDB cloning work?

You can use PDB cloning to clone a PDB in a multitenant environment. For local or remote PDBs, use a refreshable clone or snapshot carousel to create PDB clones in a local container database.

What is a PDB snapshot?

What is a PDB snapshot carousel?

A PDB snapshot carousel maintains a library of recent PDB snapshots that you can use to perform a point-in-time recovery and to clone a PDB. 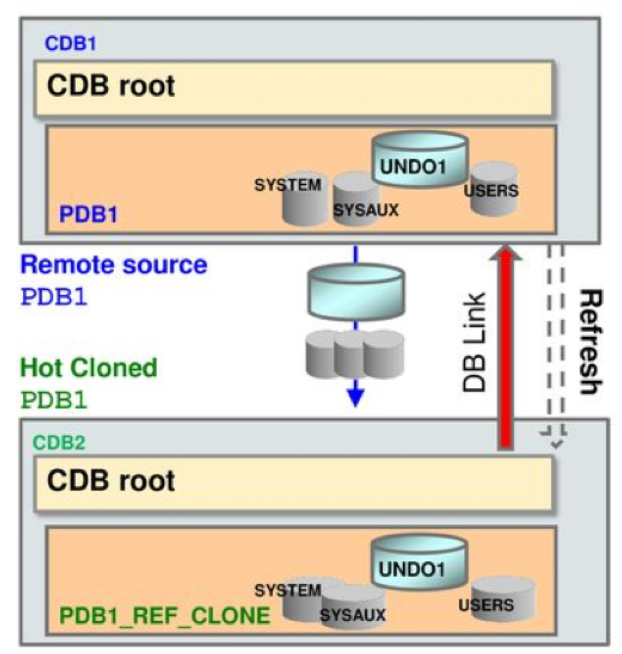 You can change refresh modes by setting up an environment with the following modes:

Create and work with a refreshable clone

Use the following statement to clone the source PDB and configure the clone to be refreshable. Refreshing the clone PDB updates it with redo data accumulated since the last redo log apply.

Use the following statement to change the current mode of a refreshed or disabled refreshable clone and convert it to a fully functional PDB:

Typically, you maintain a master refreshable clone of a production PDB and then take snapshot clones of the master for development and testing.

Use the following statement to reverse the roles for source and clone PDBs:

You can simplify this switchover process, as shown in the following figures:

This switchover capability is useful in the following situations.

Planned switchover of a refreshable clone

Execute this role transition by using the following command on the current primary database:

After this command completes, PDB1_REF_CLONE in CDB2 assumes the primary role. CDB1 now maintains the replica. All connections to production connect to the new primary, which is now CDB2. You lose no more than two minutes of transactions, assuming that the refreshes kept up with the redo generation rate from the source.

Unplanned switchover of a refreshable clone

If the source PDB has an unplanned failure, you can switch the clone PDB to the new source PDB and resume the normal operations.

Be sure to test your environment by using realistic transaction volumes to ensure that the process of refreshing the replica can keep up with the redo generation rate.

How do refreshable clones differ from Data Guard?

To strengthen the refreshable clone PDB feature for high availability and have almost no data loss, set the REMOTE_RECOVERY_FILE_DEST parameter to archive the source PDB's log location.

You should not consider the refreshable clone PDB feature as a replacement for Data Guard from the perspective of high availability. However, you can use a refreshable clone to maintain a replica database on another server.

This post described how to use refreshable PDBs as replicas so that you can resume certain low-load, non-critical applications operations, whether the switchover is a planned or an unplanned event. Keep in mind that you should consider the switchovers from the point of view of Recovery Time Objectives (RTOs, time to resume operations) and Recovery Point Objectives (RPOs, such as achieving minimal data loss).

Part Two of the series demonstrates the refreshable clone feature.

Use the Feedback tab to make any comments or ask questions. You can also chat now to start the conversation.

Tejashkumar Patel
I am a Database Administrator with more than a decade of experience in various RDBMSs, Big Data and NoSQL database technologies, and the cloud platform.