With the proliferation of mobile and web applications, latency has certainly become a huge deal on the Internet of today. The Internet is a very competitive environment, and users are becoming more and more content hungry and certainly impatient with latency.

Latency is a serious business concern for some big market players such as Google® and Amazon®. Some studies have shown that users might visit a website less often if it is slower just by a quarter of a second (250 ms), and another study has shown that Amazon could lose up to one percent of its sales because of a tenth of a second delay (100 ms).

We know that bandwidth is cheap and will continue to grow, but there is a fundamental limitation with what we can do about latency. Information cannot travel faster than the speed of light. So, unless we can figure out how to travel faster than the speed of light, build tunnels through the earth, or move to a smaller planet, we are faced with the challenge of minimizing the number of round-trip times (RTTs) required to establish a connection—hopefully without sacrificing security.

And this is exactly where QUIC comes in.

Google originally introduced the Quick UDP Internet Connection (QUIC) protocol in 2014 to provide a next-generation multiplexed transport that conforms to the Internet Engineering Task Force (IETF) standards: (Draft version 28 at the time of the writing).

QUIC is a new transport protocol designed from the ground up to improve performance for HTTPS traffic and to enable rapid deployment and continued evolution of transport mechanisms. QUIC, implemented on top of User Datagram Protocol (UDP), replaces most of the traditional HTTPS stack:

TCP is usually implemented in operating system kernels and middlebox firmware, so making significant changes to TCP is next to impossible. However, because QUIC is built on top of UDP and located in the user-space, it suffers from no such limitations.

QUIC is basically Google's answer to the latency challenge. Google has deployed the protocol globally on thousands of servers. It serves traffic to a range of clients, including a widely-used web browser (Chrome™) and a popular mobile video streaming app (YouTube®). We estimate that around five percent of today’s Internet traffic runs on QUIC (source: w3techs).

Where does QUIC fit?

Let’s understand now where the QUIC protocol fits in the Open Systems Interconnection (OSI) layer. QUIC is a cross-layer protocol that rides on top of UDP. It becomes its own protocol by stealing of all the good things from TCP (congestion control and loss recovery), TLS (cryptography and handshake), and all of the control aspects of HTTP/2 (multi-streaming). 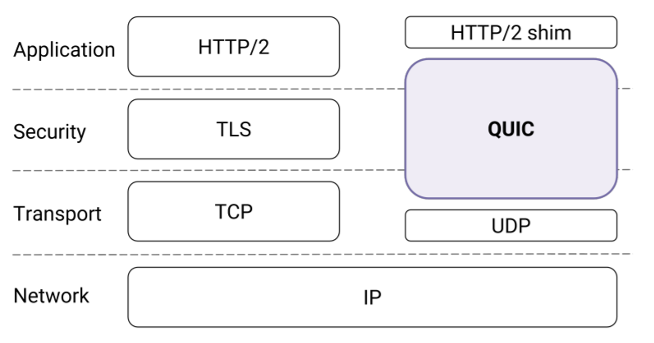 What are the benefits of QUIC?

QUIC addresses some of the challenges encountered by modern web applications on desktop or mobile devices. You can learn more about QUIC on the IETF working group website, but the following list has some of the key features of QUIC:

What are the challenges with QUIC?

The main challenge encountered with QUIC is the middleboxes out there on the Internet. Middleboxes have somehow become key checkpoints in the Internet architecture. Firewalls tend to block anything unfamiliar for security reasons, and NATs rewrite the transport header, making both incapable of allowing traffic from new transports, such as QUIC, without explicit support. The firewall blocks any packet content not protected by end-to-end security, such as the TCP packet over which the organization implementing the protocol has no control. This is one of the reasons Google developed the QUIC protocol on top of UDP. UDP and TCP are built into the kernel space, which is difficult to change and very slow to update.

Google has come up with a new initiative to make the web faster and more reliable. For several years, Google has been investing heavily in the webspace. First, it deployed one of the biggest content delivery network (CDN) global cache networks to get closer to its users. Then, it developed one of the most widely used browsers, Google Chrome, to be even closer to the user. Finally, it reshaped the transport protocol by opening QUIC to the open-source community.

Even though the protocol is not yet standardized, we see a growing interest by some big players like Cloudflare® and Akamai®, which have already added support for QUIC in their edge network.

The QUIC protocol has made serious advances in the last few years and has inspired some new or still-in-draft technologies such as the following ones:

After going through the features and benefits of the protocol, you hopefully agree that QUIC is a faster and more secure transport layer protocol, which is definitely designed for the needs of the modern Internet. Stay tuned for the official announcement from the IETF.

Mustapha Benmbarek
Mustapha works with startups and companies of any size to support their innovation. In his role as Solutions Architect at Rackspace, he leverages his experience to help people bring their ideas to life, providing guidance and technical assistance on cloud-based and AWS architectures.