This guest post was contributed by Mr. Brandon Philips. Brandon is part of a small team of Rackers getting the Rackspace Cloud Monitoring Agent ready for launch. The Agent helps customers monitor the internals of their servers and application. You can check out his site at http://ifup.org, find him at local San Francisco meetups and check out his code on Github.

The public internet can be a scary place for servers. Log files of servers attached to public addresses shows regular port scans and URL snooping. These log entries are the inescapable reminder that your hosts are always one misconfiguration away from disaster.

This guide teaches you how to create a bastion host and an isolated cloud network, so you can reduce the number of servers that have to encounter these threats. <!-- more -->

And the best thing? With a bit of SSH magic, logging into these hosts is completely transparent. SSH can take care of proxying connections through the bastion host. 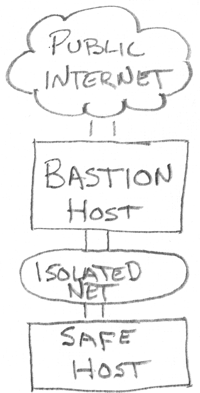 Bastion hosts are simply a choke point that provides access to the hosts behind it only to authorized users. A bastion host serves the same purpose as a bouncer at a bar: like the bouncer the bastion host checks everyone’s ID before they are allowed inside.

Using Cloud Networks, you can create Rackspace Cloud Servers that do not have a public IP and attach to only an isolated Class A, B or C network that only your Cloud Servers can talk to.

First, let’s create our isolated cloud network, “Infrastructure Network”. Our bastion host connects to both this network and the public network. Every other host connects to the infrastructure network exclusively. Because I don’t need a huge network space, I will create a small class C network in the 192.168.3.0 subnet.

Throughout this guide I will use the supernova command line client. See this article on configuration of supernova. You can also create this configuration using the Cloud Control Panel.

Next, let’s create our bastion host and attach it to this bastion network. You specify the network using the nic flag and the UUID of the network that you can find in the command output above.

After the build completes, all of our IP addresses are assigned. Great!

Now, we can create a host that attaches only to the “Infrastructure” network. Let’s call this server “safe.” Again, use the UUID for the network and also tell Cloud Servers not to attach the server to the public internet or Rackspace’s ServiceNet.

After a bit of waiting, our machine completes its build and is assigned a private IP address. Now that we have the hosts built up, we can setup SSH to transparently log us into our safe host via our bastion host.

SSH has a powerful configuration file format that lets you modify how SSH behaves depending on the hostname you provide on the command line. Let’s look at using some of those features including the Hostname and ProxyCommand directives to make SSHing into our new environment easy.

First, instead of introducing the complexity of DNS to this article, let's use host aliases in our $HOME/.ssh/config file. This lets us SSH to these newly created hosts without specifying a user or IP, for example, ssh bastion

Now you can get into the bastion host by running ssh bastion. However, trying to ssh safe fails because your workstation won’t be able to route to the private network. So, let’s tell ssh that it needs to proxy through the bastion host to reach this host:

After making this modification, ssh safe drops you into the terminal of the host. Awesome!

Using this pattern of a bastion host and isolated network is great for a lot of common uses:

These are the bare bones basics of setting up a bastion host. Here are some ideas on where to go next:

Adding an isolated network to your cloud environment can simplify the configuration of a strong security stance. And with a bit of configuration the added security is mostly transparent to your day to day work.

Ready to get started? Cloud Networks is being rolled out to Rackspace Customers now; you may already have access. If you don’t yet have access, sign up.