This blog post discusses how you can automate the creation of a Google® Cloud Platform (GCP) Cloud SQL instance by using Ansible® and Jenkins®. The blog also includes an example of spinning up a MySQL® Cloud SQL instance, version 5.7, with an Ansible playbook.

Using Ansible and Jenkins lets you spin up a GCP Cloud SQL instance quickly by accessing Cloud SQL with a project-specific GCP account. This option ensures additional security by providing access to the GCP console only to users with GCP admin access. You can write playbooks for different GCP services and rollout Jenkins jobs to users to spin up GCP infrastructure as needed.

To perform this task, you need to use Ansible and Jenkins.

Ansible: Use this for configuration management and as an orchestration tool in DevOps. Ansible has a wide variety of prebuilt modules written in Python for different products in the market that you can customize by using Python.

Jenkins: You can use Jenkins as a continuous integration server or as an automation server. Based on Java®, Jenkins has a wide range of plug-ins for different products in the market. You can customize the plug-ins by using Java or Apache® Groovy.

In this task, Ansible acts as an orchestration tool, and Jenkins acts as an automation server. Prerequisites for doing this task include the following items:

Set up the Ansible playbook

After completing the prerequisites, you need to move the Ansible playbook and service account key file to the Jenkins server. 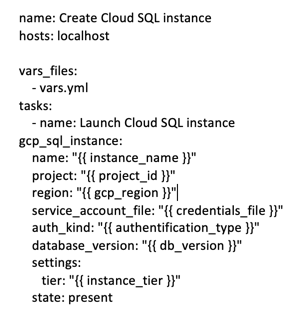 The playbook in this example uses the following playbook variables files and stores them in vars.yml:

Jenkins is an automation server, and the job is a basic component in Jenkins that you use to define the task that you want to automate.

The job defines CloudSQL as the job name.

After the CloudSQL job runs, you should see output similar to the following output:

Use Jenkins and Ansible to implement Infrastructure as a Code (IaaC), which helps to avoid human errors during infrastructure spin up and restricts access to the GCP console to a limited set of users. Automating this task by using Ansible and Jenkins provides a GUI for authorized Jenkins users who don't know GCP or how to spin a Cloud SQL instance.

Get a free GCP architecture review

Chat now to get started.

Dinesh Miriam
I am a Senior Database administrator with experience on SQL and NoSQL databases.