What is Parallel Replicat?

Parallel Replicat is a highly scalable apply engine for the Oracle database that can automatically parallelize the apply workload and take dependencies between transactions into account. Parallel Replicat provides all the benefits of Integrated Replicat by performing the dependency computation and parallelism outside of the database. It parallelizes the reading and mapping of trail files and provides the ability to apply large transactions quickly. The dependency computation, parallelism of the mapping, and apply are performed outside of the database and can be off-loaded to another server. The transaction integrity is maintained in this process.

In addition, the SPLIT_TRANS_RECS parameter splits a larger transaction into logically smaller pieces to apply in parallel. Dependencies are managed and maintained as well. 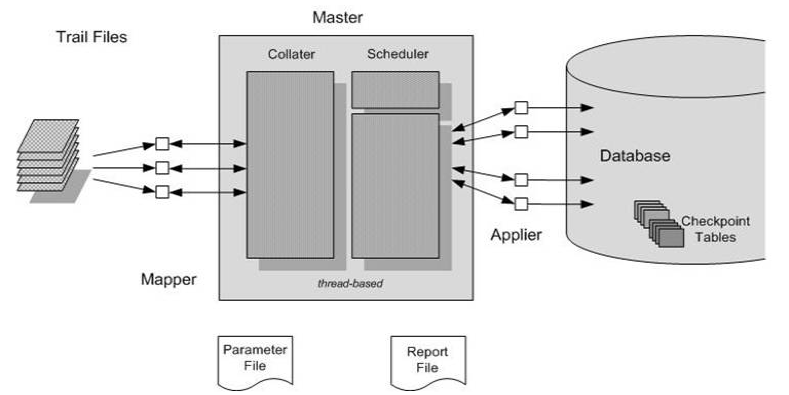 The architecture starts by reading a single trail file but provides a wider road with multiple lanes for reading (mappers) and writing (appliers). Parallel Replicat ensures that all the transactions are ordered based on the key dependencies (primary key (PK), foreign key (FK) and unique key (UK)). This is a huge difference from Integrated Replicat, where the dependency and writing are done within the database.

Additionally, Parallel Replicat can be configured to run in one of the following modes:

The following features are key for Parallel Replicat:

You can use the following parameters can be used in Parallel Replicat processing:

APPLY_PARALLELISM: Configures the number of appliers. This parameter controls the number of connections in the target database that are used for applying the changes. The default value is 4.

SPLIT_TRANS_REC: Specifies that large transactions should be broken into pieces of a specific size and applied in parallel. Dependencies between pieces are still honored. This parameter is disabled by default.

Perform the following steps to add non-integrated Parallel Replicat with the adminclient:

After the Replicat is created, it automatically shows up in the associated administration service.

After the Replicat starts, the number of threads that you specified for readers (mappers) and writers (appliers) are shown in the report files.

The following code is a sample parameter file for Parallel Replicat:

GoldenGate is already a great replication tool from Oracle that provides heterogeneous replication between different types of databases or platforms. Oracle has added an extra advantage to the GoldenGate technology with Parallel Replicat.

Parallel Replicat is a new variant of Replicat that applies transactions in parallel to improve system performance. Parallel Replicat provides all the benefits of Integrated Replicat while performing the dependency computation and parallelism outside the database. It reads and maps all trail files in parallel and provides the ability to apply large transactions quickly in Oracle Database versions 11g (11.2.0.4) and above.

Ravi Kant Sharma
I am ambitious and driven. I thrive on challenge and constantly set goals for myself, so I have something to strive toward. I’m not comfortable with settling, and I’m always looking for an opportunity to do better and achieve greatness.