Neutron networking: The building blocks of an OpenStack Cloud

New to OpenStack? Rackspace offers a complete open-source package, Rackspace Private Cloud Software, that you’re welcome to use at no cost. Download and follow along.

Getting started: What is Neutron?#

Search the Internet for “Quantum Networking” and you’re bound to be overwhelmed with articles on the building blocks of our universe rather than the building blocks of OpenStack. The recent name change from Quantum to Neutron makes relevant information easier to find, but it’s clear that the community is in dire need of real-world networking examples.

Before we can dig into the configuration of Neutron, it’s important to understand what it is and how it interacts with the rest of the OpenStack architecture. Neutron is the networking component of OpenStack, and is a standalone service alongside other services such as Nova (Compute), Glance (Image), Keystone (authentication), and Horizon (Dashboard). Like those services, the deployment of Neutron involves deploying several processes on each host.

Thanks to its pluggable infrastructure, third-party and community developers can create plugins to extend the use and capabilities of Neutron within a cloud. There are plugins for LBaaS (load-balancing as a service), VPNaaS (VPN-as-a-service), Layer 2, Layer 3 and more.

Open vSwitch: How does it fit?

Open vSwitch is an open source, software-based virtual switch that is utilized by Neutron. It can operate both as a soft switch running within the hypervisor, and as the control stack for physical switching devices. The Neutron openvswitch plugin consists of two components:

For OpenStack, Open vSwitch is installed as a kernel module or userspace-only process. Much like a physical switch, Open vSwitch is responsible for the proper tagging and forwarding of traffic based on OVS port configuration. Aside from building the initial bridge(s), Neutron handles most all other interaction with OVS via the openvswitch plugin. It is possible to manipulate OVS outside of Neutron for further networking requirements, but these scenarios are outside the scope of this article.

One of the core requirements of a networking service for OpenStack is to provide connectivity to and from instances.

There are two categories of networks that can be created within Neutron:

Provider networks are networks created by the OpenStack administrator that map directly to an existing physical network in the data center. An example of this would be networks behind a set of firewalls or load balancers that are routable within your data center. Useful network types in this category are flat (untagged) and vlan (802.1q tagged). It is possible to allow provider networks to be shared among tenants as part of the network creation process.

Tenant networks are networks created by users within tenants, or groups of users. By default, networks created with tenants are not shared among other tenants. Useful network types in this category are vlan (802.1q tagged) and gre (unique id). With the use of the L3 agent and Neutron routers, it is possible to route between GRE-based tenant networks. Without a Neutron router, these networks are effectively isolated from each other (and everything else, for that matter). 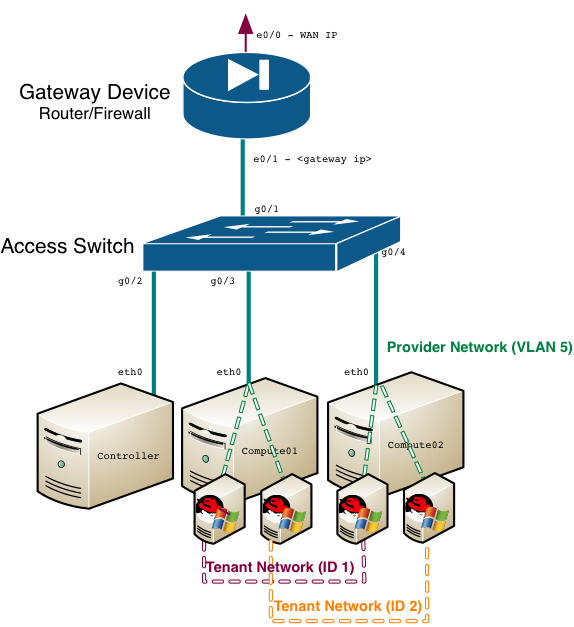 This diagram represents a simple Neutron networking configuration that uses a tagged provider network for connectivity to the Internet, as well as two isolated GRE-based tenant networks for private communication between instances.

There’s so much more to Neutron than what’s been covered here, but the foundation has been laid for building simple networks for instance connectivity. With some basic configuration of physical network devices, and a little API magic, one can build a functioning cloud based on Rackspace Private Cloud powered by OpenStack.