In the previous installment, Neutron Networking: The Building Blocks of an OpenStack Cloud, I laid the foundation of the Neutron networking model that included terminology, concepts, and a brief description of services and capabilities. In this second installment, I’ll describe how to build a simple flat network consisting of a few servers and limited networking gear. Future installments will include VLAN-based provider and tenant networks, GRE-based tenant networks, Open vSwitch troubleshooting, and more.

New to OpenStack? Rackspace offers a complete open-source package, Rackspace Private Cloud Software, that you’re welcome to use at no cost. Download and follow along.

Getting started: What is a flat network?

For those coming from previous Essex- or Folsom-based Rackspace Private Cloud installations, flat networking in Neutron resembles the Flat DHCP model in Nova networking. For those new to the game, a flat network is one in which all instances reside on the same network (which may also be shared by the hosts). No vlan tagging takes place, and Neutron handles the assignment of IPs to instances using DHCP. Therefore, it’s possible to use unmanaged SOHO network switches to build a simple Neutron-based cloud, since there’s no need to configure switchports. 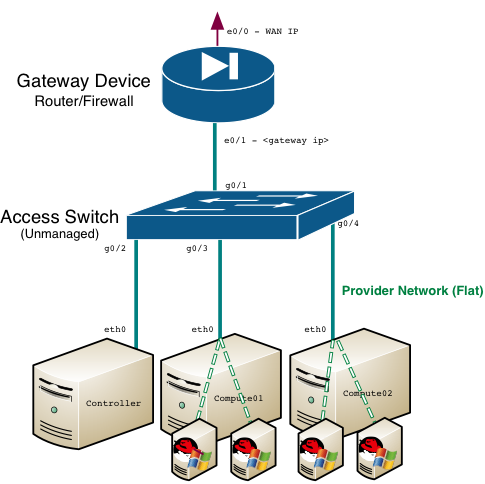 The diagram above represents a simple Neutron networking configuration that utilizes a flat provider network for connectivity of instances to the Internet.

In the following diagram, a Cisco ASA 5510 is serving as the lead gateway device, with a Cisco 2960G access switch connecting the firewall and servers together via VLAN 1. 10.240.0.0/24 was chosen as the management network for hosts, but will also serve as a provider network for instances. We’ll be using a single interface on the servers for both management and provider network connectivity. 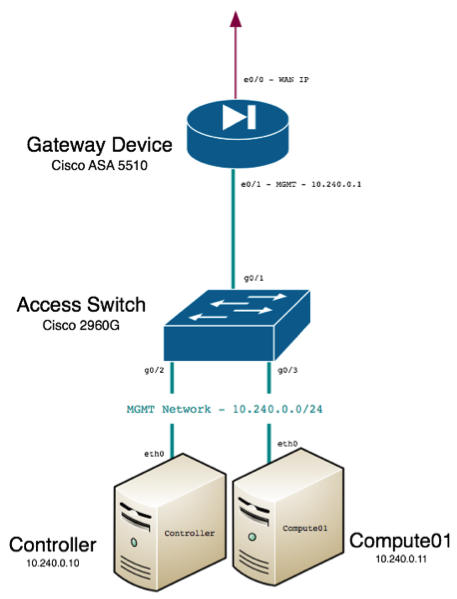 The Cisco ASA was chosen for this example as it’s readily available at my location. Any router or firewall should be sufficient as long as you’re able to disable DHCP on the inside interface (you don’t want it to conflict with Neutron, after all).

Depending on the model of switch, your switchports may be unmanaged or in vlan 1 by default. With the flat networking model, your gateway and hosts must simply sit in the same vlan or broadcast domain; the vlan ID itself is irrelevant. There’s a good chance your servers have their IP configured directly on eth0. To utilize Neutron, the hosts must have a network bridge configured. This can be accomplished one of two ways:

In order to configure the bridge, eth0 must be modified and the bridge interface created:

TIP: Do not set br-eth0 to auto. Because of the order that processes are started at boot, the interface must be brought up using rc.local. Instead, edit the /etc/rc.local file of each machine and add the following line before the ‘exit’ statement:

Briefly mentioned in the previous installment, Neutron Networking: The Building Blocks of an OpenStack Cloud, was Open vSwitch – the virtual switching infrastructure utilized by Neutron. Creating the bridge in Open vSwitch is a requirement for proper management of traffic.

The following will create a bridge called ‘br-eth0’ and place physical interface eth0 inside:

The creation and configuration of the bridge enables the instances to communicate on the network.

When using RPC v4, most configuration changes are handled via Chef. A few changes must be made to the environment file to utilize the bridge for Neutron networking.

The bridge configuration should be modified to mirror the following example, if it doesn’t already exist:

Note: The vlan range above is not used in this example

The label ‘ph-eth0’ represents our provider interface, in this case the bridge ‘br-eth0’. It will be used during the creation of networks in Neutron.

Save the changes to the file and run chef-client on all the hosts to populate the changes.

Changes to environment (other)

When using something other than RPC v4 (such as the OpenStack source), configuration changes must be made to the appropriate configuration files and services restarted manually.

Within /etc/quantum/plugins/openvswitch/ovs_quantum_plugin.ini, update the following values:

The label ‘ph-eth0’ represents our provider interface, in this case the bridge ‘br-eth0’. It will be used during the creation of networks in Neutron. It’s possible to have more than one provider bridge, especially when you have multiple switching infrastructures for various networks and services. Restart all Neutron and Open vSwitch services on all hosts for the changes to take effect.

Remember the bridge (br-eth0) we created in OVS earlier? At a high level, it can be looked at as our bridge to the physical network infrastructure. Neutron requires an ‘Integration Bridge’ that serves as the bridge to our virtual instances. The integration bridge connects vNICs and Neutron DHCP and L3 agents with virtual networks. Overriding the default value of ‘br-int’ is not recommended, as the bridge must be named the same on each host (controller/compute). RPC v4 creates this bridge during the chef-client run.

For those installing from source, the name of the bridge is defined in /etc/quantum/plugins/openvswitch/ovs_quantum_plugin.ini:

The bridge will need to be created manually in OVS if you are not using Chef:

Now that the infrastructure is in place and the bridges are configured, it’s time to build a flat provider network in Neutron. Creating a flat provider network requires only two values: the name of the network and the provider bridge label. There are additional flags that can be specified, but these aren’t required for basic connectivity.

With the network created, it’s time to create the subnet. When allocating a range of addresses for the DHCP pool, be sure not to overlap with other machines on the network (including the controller/compute nodes).

It’s a good idea to provide values for the following options:

Now that the network has been built in Neutron, it’s time to test connectivity by spinning up an instance. Like the hosts, my instance is Ubuntu 12.04 LTS.

Check the Nova console log to verify the instance received its IP, routes and metadata:

Once the instance is available, login using the keypair specified in the boot command:

Confirm the necessary routes are in place:

Pinging an external IP should reveal positive results as long as a static NAT or PAT exists on the external gateway device and the traffic is permitted:

With a limited amount of networking hardware one can create a functional private cloud based on Rackspace Private Cloud powered by OpenStack. While the flat network model provides basic connectivity, it is best used in cases where scalability is not a concern, or where switches may be unmanageable.