In Part 1 of this two-part series on Apache™ Hadoop®, we introduced the Hadoop ecosystem and the Hadoop framework. In Part 2, we cover more core components of the Hadoop framework, including those for querying, external integration, data exchange, coordination, and management. We also introduce a module that monitors Hadoop clusters.

Part 1 of this series introduced Apache Pig™ as a scripting tool. Written in Pig Latin, Pig is translated into executable MapReduce jobs. It offers several advantages that you can learn more about in Part 1.

However, some developers still prefer SQL. If you'd rather go with what you know, you can use SQL with Hadoop instead.

Apache Hive™ is a distributed data warehouse that manages and organizes large amounts of data. This warehouse is built on top of the Hadoop Distributed File System (HDFS™). The Hive query language, HiveQL, is based on SQL semantics. The runtime engine converts HiveQL to MapReduce jobs that query the data.

The following image visualizes the architecture of the Hadoop ecosystem: 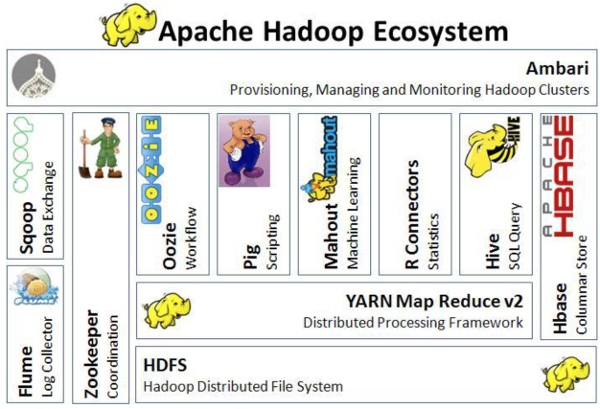 Apache Sqoop™ is designed to efficiently transfer bulk data between Hadoop and external data stores such as relational databases and enterprise data warehouses. Sqoop works with relational databases such as Teradata Database, IBM® Netezza, Oracle® Database, MySQL™, and PostgreSQL®. Sqoop is widely used in most companies that collect or analyze big data.

Zookeeper is an administrative Hadoop tool used to manage the jobs in a cluster. Some developers refer to this tool as a "watch guard" because any changes to data in one node are communicated to the other nodes.

Apache Ambari™ is a web-based tool for provisioning, managing, and monitoring Apache Hadoop clusters. It has a very simple yet highly interactive user interface for installing tools and performing management, configuration, and monitoring tasks. Ambari provides a dashboard for viewing information on cluster health, such as heat maps. It also enables you to view your MapReduce, Pig, and Hive applications alongside features so that you can easily diagnose their performance characteristics.

Hadoop is a very effective solution for companies that want to store and analyze massive amounts of data. It's a much sought-after tool for data management in distributed systems. Because it's open source, it's freely available for companies to leverage. To learn more about Hadoop, see the official documentation at the Apache Software Foundation website.

Have you used Hadoop? Use the Feedback tab to make any comments or ask questions.