Apache™ Hadoop® is an open source, Java-based framework that's designed to process huge amounts of data in a distributed computing environment. Doug Cutting and Mike Cafarella developed Hadoop, which was released in 2005.

Built on commodity hardware, Hadoop works on the basic assumption that hardware failures are common. The Hadoop framework addresses these failures.

In Part 1 of this two-part blog series, we'll cover big data, the Hadoop ecosystem, and some key components of the Hadoop framework.

Data is bigger than ever

Data is crucial to all organizations, and big data is opening up new opportunities for analyses that can lead to valuable business insights. Big data refers to data that's beyond an organization's storage capacity and processing power.

There are three main aspects of big data, all of which are progressing at a breakneck pace:

We can sum up big data with the following equation:

The following image provides a visualization of these concepts. 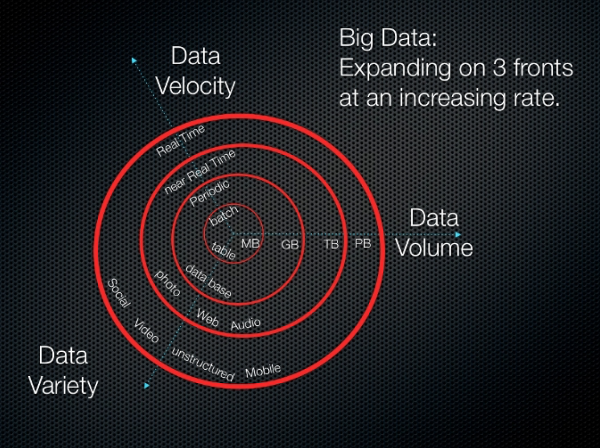 The term Hadoop ecosystem refers to the various components of the Apache Hadoop software library. This ecosystem is comprised of a set of different modules that interact with each other. These modules provide a set of tools and accessories that are designed to address the unique requirements involved in processing big data. The ecosystem encompasses all Hadoop modules, including the core components of the Hadoop framework that we discuss below, as well as add-on modules.

Components of the Hadoop framework

In Hadoop, distributed storage is referred to as the Hadoop Distributed File System (HDFS). This system provides redundant storage and has the following characteristics:

HCatalog is a table and storage management layer for Hadoop that enables Hadoop applications such as Pig™, MapReduce, and Hive™ to read and write data in a tabular format as opposed to the files.

It also offers the following features:

Hadoop relies on MapReduce and Yet Another Resource Negotiator (YARN) to enable distributed processing.

MapReduce is a distributed data processing model and execution environment that runs on large clusters of commodity machines. MapReduce enables you to create insights from the data you've stored. It uses the MapReduce algorithm to break down all operations into Map or Reduce functions.

YARN is the cluster and resource management layer for the Apache Hadoop ecosystem. It's one of the main features in the second generation of the Hadoop framework.

Oozie is Hadoop's system for managing jobs. This workflow scheduler runs the workflows for the dependent jobs. It enables users to create directed acyclic graphs (DAGs) of workflows that run parallel and sequential jobs in Hadoop.

Oozie is scalable and can manage timely execution of thousands of workflows (each consisting of dozens of jobs) in a Hadoop cluster.

Developers can use Apache Pig for scripting in Hadoop. Scripting uses a SQL-based language and an execution environment for creating complex MapReduce transformations. While Pig is written in the Pig Latin coding language, it's translated into executable MapReduce jobs. Pig also enables users to create extended or user-defined functions (UDFs) using Java.

Hadoop and the MapReduce framework already have a substantial user base in the bioinformatics community, especially in the field of next-generation sequencing analysis. Its popularity in this field is partly due to its robust, fault-tolerant HDFS.

HBase adds a distributed, fault-tolerant, scalable database that's built on top of the HDFS file system, with random real-time read and write access to data. You may also want to check out Mahout for building scalable machine learning libraries, or Pig for batch processing data.

In Part 2 of this series, we'll cover more components of the Hadoop ecosystem.