Get decked out for Docker

Businesses compete to transform digitally, but most are restricted in some way or another from moving over to the cloud or to a new data center by existing applications or infrastructure. Docker® comes to rescue and enables the independence of applications and infrastructure. It is the only container platform that addresses every application across the hybrid cloud.

This blog provides insights into the Docker architecture and key features so that you can get started with these migration activities and explains why you might want to use Docker.

Docker is a container management service that allows businesses to develop an application, place it in a container, and deploy it anywhere on the cloud, which makes the application independent of the infrastructure. This ensures the functionality of an application as it is moved from one environment to another.

Docker allows the application to use the same infrastructure as that of the system on which the application is running. Everything needed by the application is packed into a container and shipped to the production server. This benefits both the developers and the operations team. It frees the developers to concentrate on writing code without needing to worry about the infrastructure on which the code is deployed and running. For system administrators, Docker provides flexibility and reduces the number of systems to be configured, which reduces the extra effort, time, and space requirements.

Containerization changes the way we look at application deployment and makes Docker an important and recognized service in agile-based projects across all IT industries. The following features have inspired companies to adopt Docker at a remarkable rate:

The Docker engine is a client server application, which has a server that is a long running program called a daemon, and a client, which is the command line interface (CLI). The communication between the server and client is enabled by using a RESTful application program interface (API).

The Docker daemon creates and manages various objects such as images, containers, and volumes.

The Docker client interacts with the server through the REST API or by using CLI commands, as shown in the following diagram: 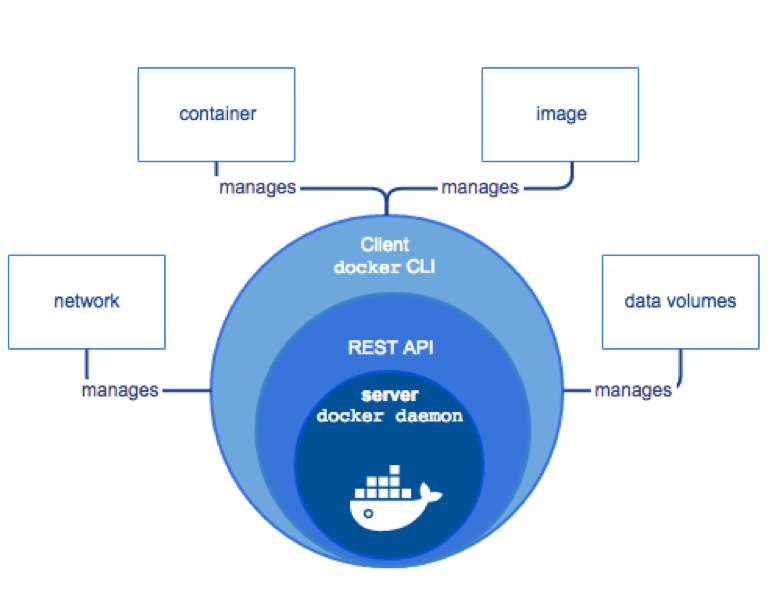 The Docker implementation involves many components, including handling images, containers, and the registry.

A Docker registry stores the Docker images. The Docker hub and Docker cloud are a public registry in the cloud that allows you to upload Docker images, which can be downloaded by anyone with access.

A Docker image is an immutable file that is a snapshot of a container.

In Docker, everything is based on images. An image is a combination of file system, parameters, and source code. Applications are developed and saved as images, which are then shipped in a container.

Build an image by using the following Docker command:

To view the history of an image, and the commands that have been executed on it, use the following command:

Containers are instances of Docker images. Containers are produced by using the Docker run <image> command. Images that are shipped in containers can be run on any OS.

List all containers on the system by using following command:

Edit a file after creating container by using the following command:

The preceding command copies the edited file to a container for debugging purposes and leaves the image intact. The next time that you run the same image, the changes are lost unless you create a new image that includes them.

Containers provide OS-level process isolation, and virtual environments provide isolation at the hardware level. If you want to use Infrastructure as a Service (IaaS), virtualization is the right choice. However, Docker containers are handy for packaging and shipping modular software. Also, Docker containers can be created inside a virtual machine, which makes software highly portable.

Unlike a hypervisor, Docker containers run on the Docker engine and do not create an entire virtual OS. Instead, all the required components that are not already running on the host machine are packed inside a container with the application. Because the host kernel is shared by Docker containers, an application needs to ship only the extra items that they need to run. This makes Docker containers lightweight, easy to create and use, and faster to start up than a virtual machine.