With the recent announcement of Cloud Images, creating custom images for the Rackspace Public Cloud is now a functionality users have at their disposal.

To simplify the custom image creation process, Rackspace released boot.rackspace.com, a collection of iPXE scripts that allows you to rapidly network boot Operating Systems, Utilities and other tools very easily. It’s especially useful for remote access environments when you don’t want to utilize remote attached CD’s in a Dell DRAC, HP iLO or some other type of remote tool. It’s especially awesome for bootstrapping your own custom installation on a Cloud Server!

In this post, I walk you through each of the steps required to get you up & running a custom version of Ubuntu 12.04 via boot.rackspace.com.

Versions of the Ubuntu operating system newer than 12.04 have not been thoroughly tested with this tutorial. Therefore, I recommend that you too use Ubuntu 12.04.

This command boots a Cloud Server with a small 1 MB iPXE based ISO. In turn, it sets up the server’s assigned networking within the virtual BIOS and netboots into a menu of operating system options hosted over HTTP on boot.rackspace.com. (Note: Example image ID updated on 9/14/2018.)

2. Connect to the boot.rackspace.com VM via the Console 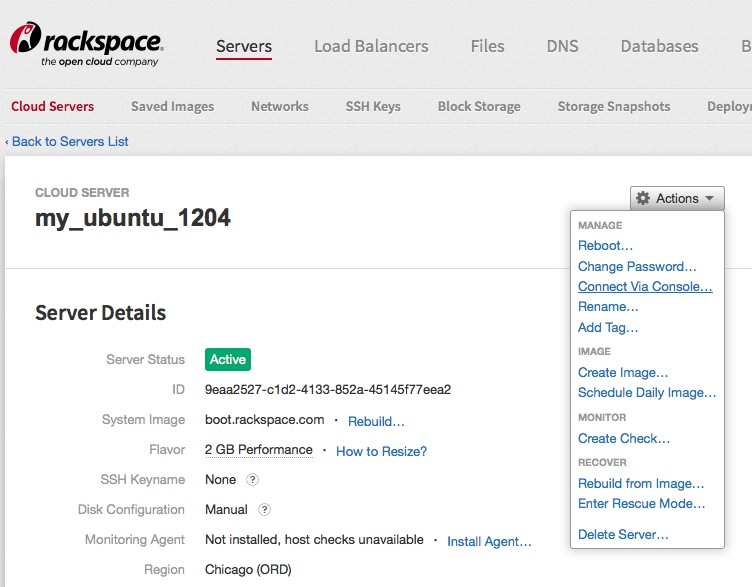 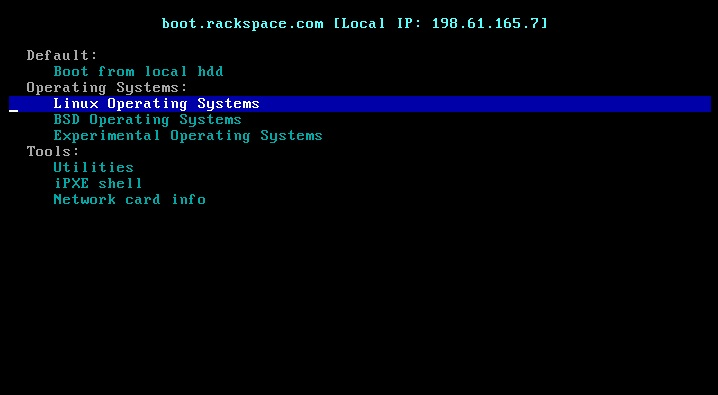 4. Select the Ubuntu operating system from the list of Distros 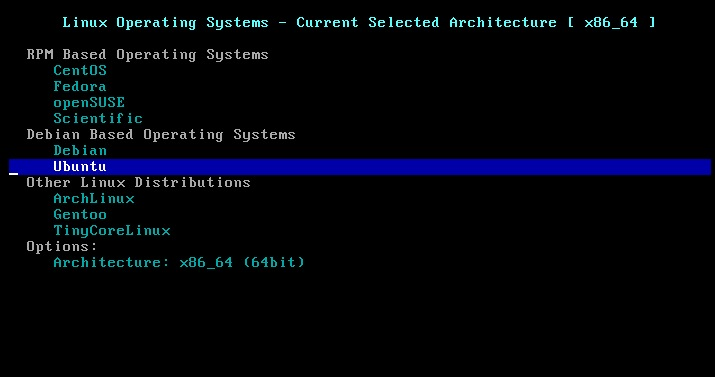 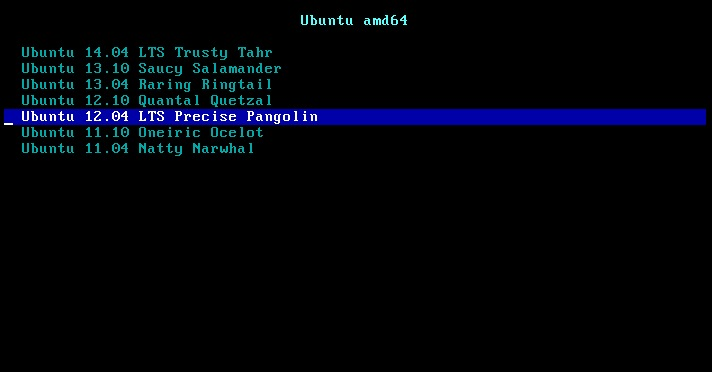 6. Select the Ubuntu operating system install from the the Boot Paramaters 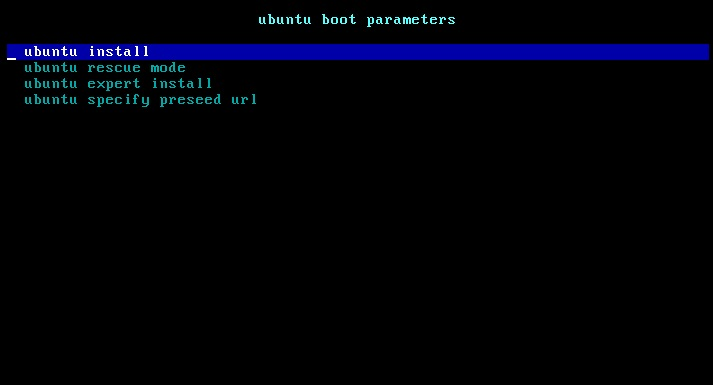 7. Proceed through the install & setup accordingly

In addition to custom modifications, make sure to do the following: 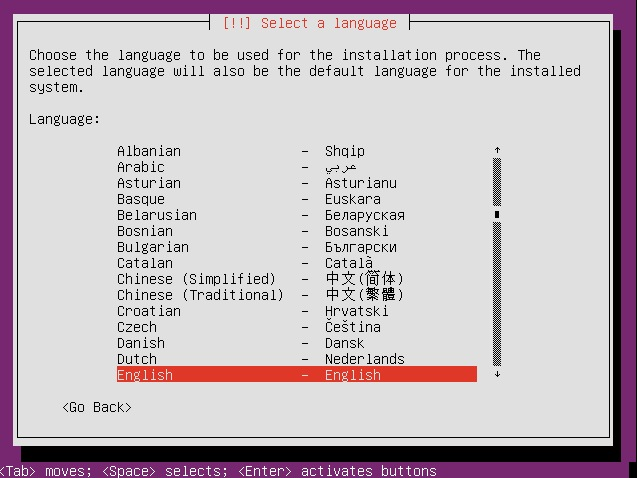 Once the installation is complete, the VM reboots and the console disconnects. Reconnect to the console, but this time, select to boot from the Local HDD because we’ve already installed the OS and because iPXE by default does a netboot. 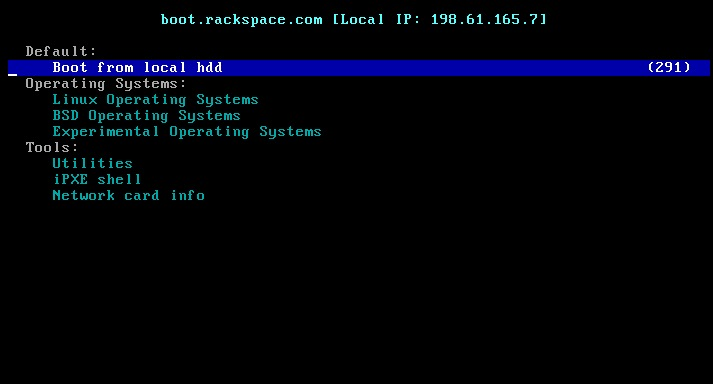 To configure the instance, you must first get to the prompt. You can do this via the console from the browser or by SSH’ing into the VM (SSH may be easier to work with). 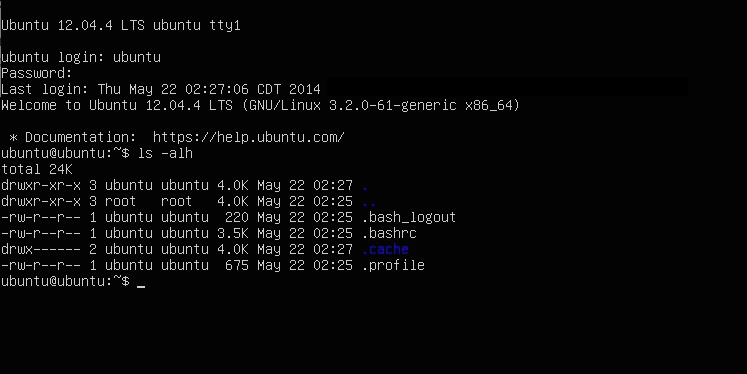 Now proceed to install XenServer Tools and the Nova Agent.

This is the opportunity to install, configure, and set up any custom system level modifications that you want to persist for future instances of the image.

11. After you complete the modifications, cleanup your image

Typically, you should remove the following before taking the snapshot to have a clean, pristine image:

12. After modifications and cleanup is done, snapshot your image

In the Server Details, select Create Image to snapshot the image as-is and give it a name, such as my_ubuntu_1204. 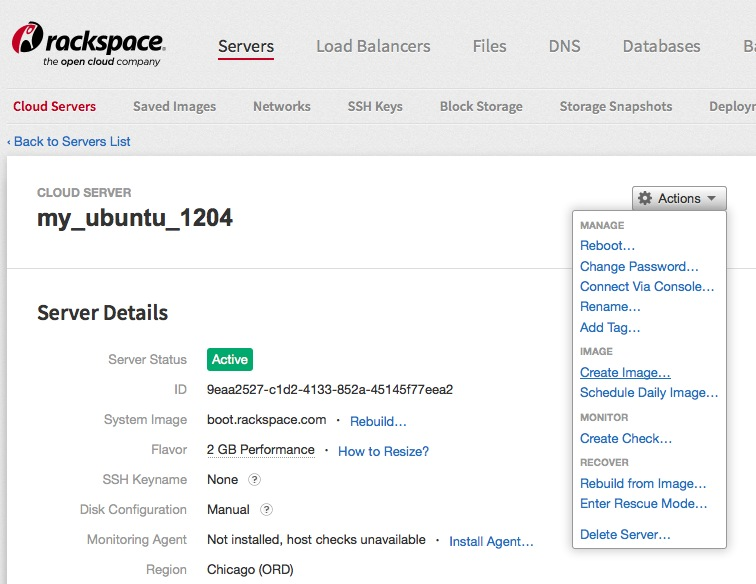 13. Set metadata for the image

If using Cloud-Init exclusively, the Agent isn’t needed, so make sure to disable it so that the build isn’t actively polling for responses from the Nova Agent:

14. After snapshotting, its time to boot your custom image

15. Log in to the VM by using the console or SSH and enjoy your new custom image :)

Mike Metral is a Solution Architect at Rackspace in the Private Cloud Product organization. Mike joined Rackspace in 2012 with the intent of helping OpenStack become the open standard for cloud management. At Rackspace, Mike has led the integration effort with strategic partner RightScale; aided in the assessment, development, and evolution of Rackspace Private Cloud; as well as served as the Chief Architect of the Service Provider Program. Prior to joining Rackspace, Mike held senior technical roles at Sandia National Laboratories performing research and development in Cyber Security with regards to distributed systems, cloud and mobile computing. You can follow Mike on Twitter @mikemetral and Github as metral