With Amazon® Web Services (AWS), you have many paths to success and an abundance of tools at your disposal for meeting your individual goals based on your circumstances. Furthermore, AWS consistently adds new features and services to make our lives that little bit easier.

One of the fundamentals when setting up your AWS environment is the Virtual Private Cloud (VPC), which is essential to create boundaries between the private and public Internet. Features core to the VPC setup include Network Access Control Lists (NACLs), subnets, and security groups.

Over the years, organizations are becoming more cloud-agnostic and are deploying many VPCs for various reasons. Whether it is to create a separation between development, test, and production or to meet geographical challenges— managing multiple VPCs has opened up discussions around using the appropriate toolsets.

You can create site-to-site virtual private networks (VPNs) between VPCs. However, this increases management overhead, not to mention the costs involved when you consider the high availability of the VPN appliances.

Amazon introduced AWS VPC peering, which makes this much easier. However, it did come with its limitations. One of the main ones is that connectivity is not transitive between VPCs. 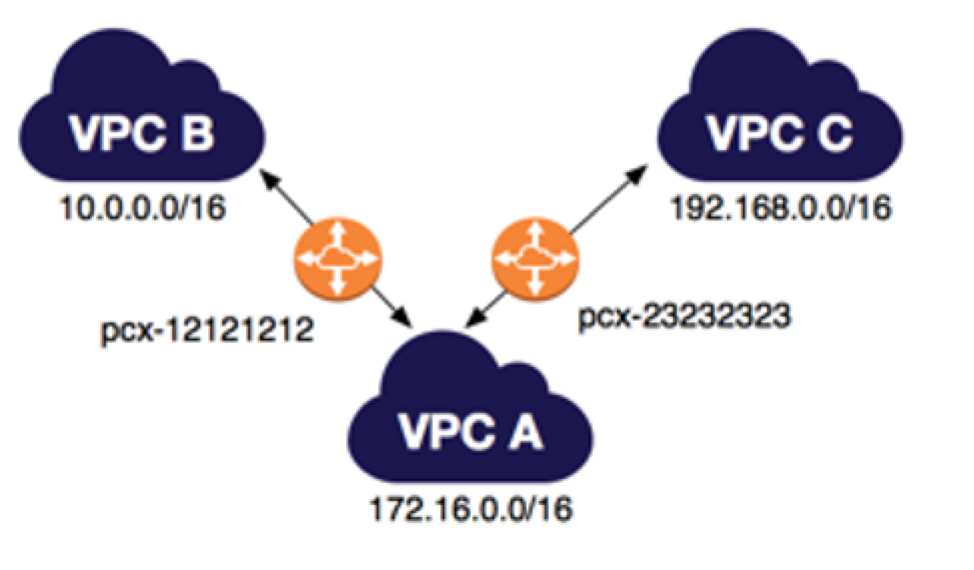 For example, in the preceding diagram, VPC A can talk to both B and C, but B and C cannot talk to each other. If B and C need to communicate to each other, you need to set up a peering between B and C. What is more, for each peering, you also need to configure the routing tables.

Eventually, you need to manage the connectivity between each VPC without having a central mechanism to route between VPCs. You can easily end up with a web similar to the one shown in the following image: 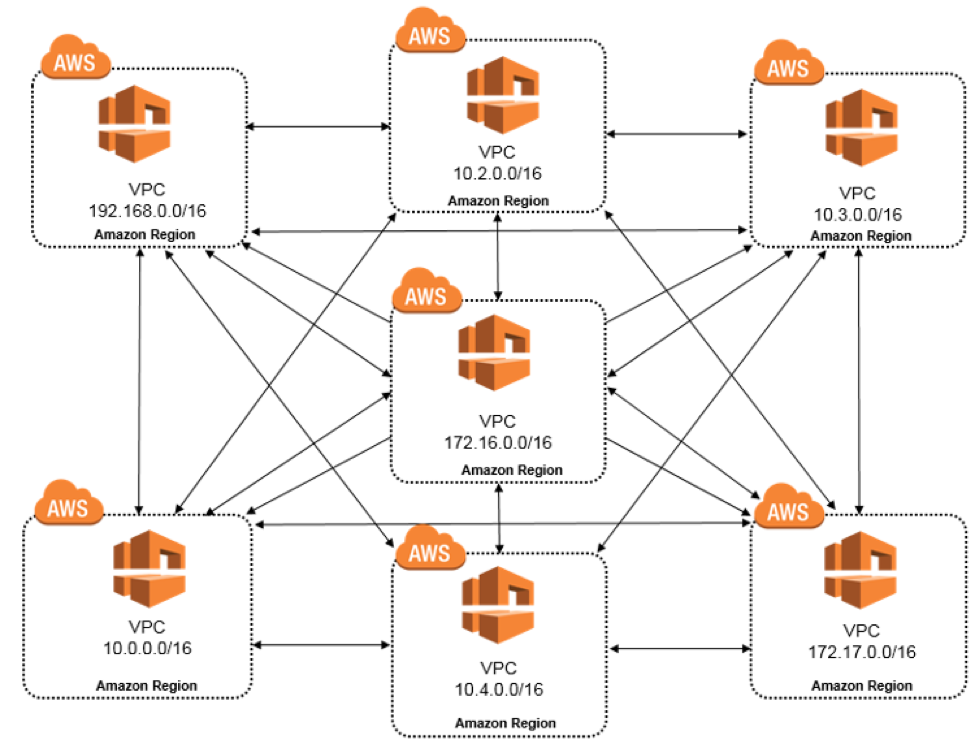 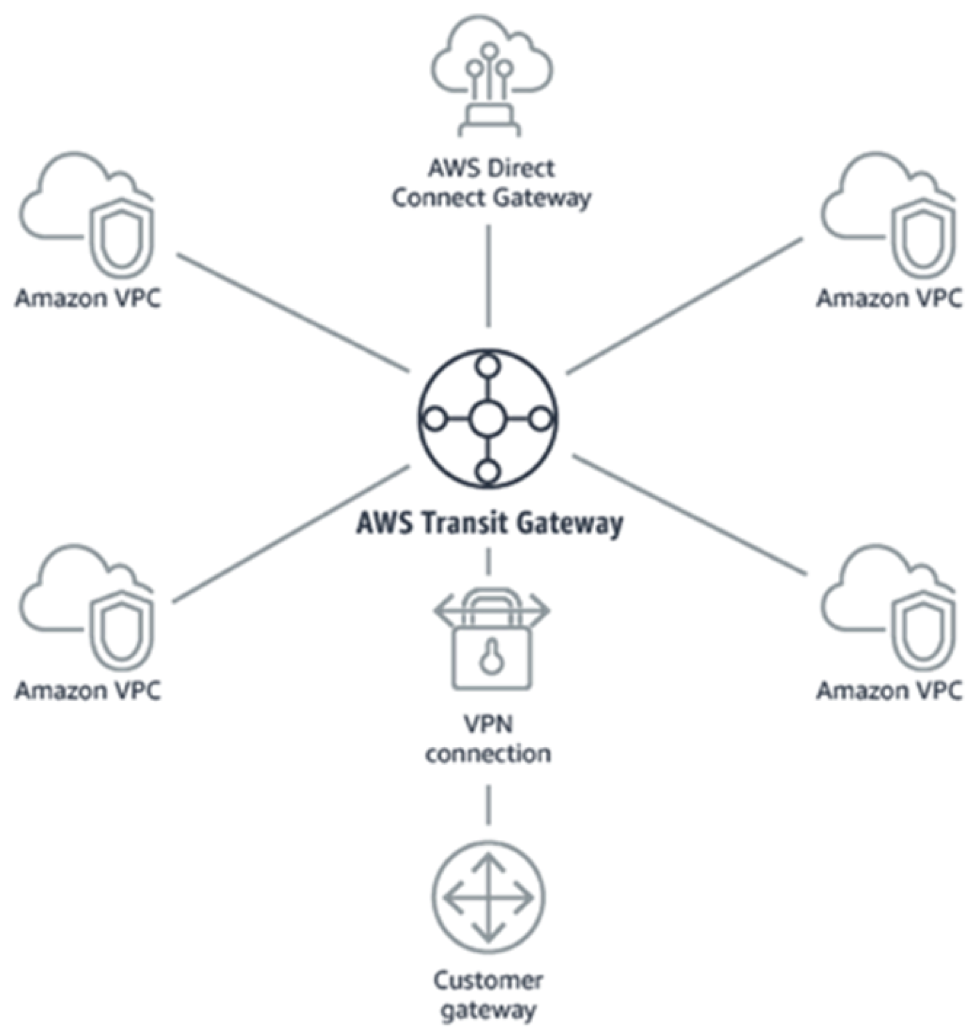 Initially, TGW didn't support inter-region peering, which was a major concern, but Amazon resolved this problem and added it to the feature list. Now, you can easily configure connectivity between regions.

As part of the prerequisites, you set up a VPC in each of your regions with an EC2 instance. Ensure that you enable Internet Control Message Protocol (ICMP) in each security group.

The goal is that you should be able to ping the instances from: 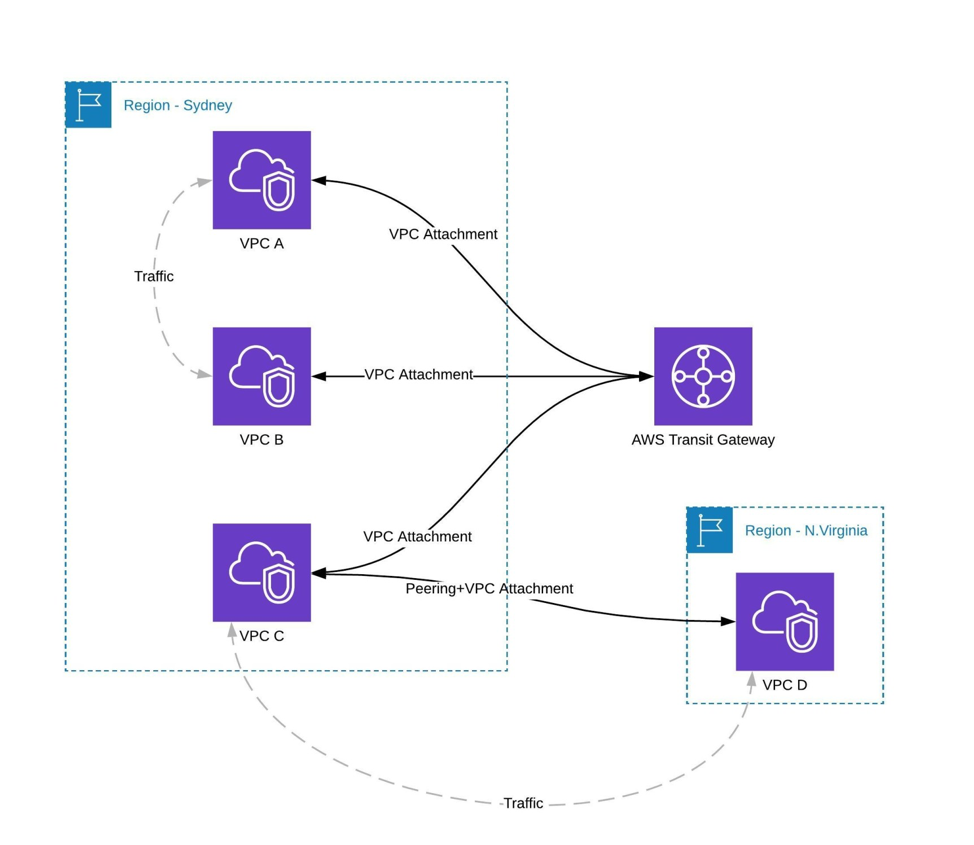 For this setup, use a single AWS account, but you can create TGW between different AWS accounts. You can deploy TGW by using the AWS console, CLI, API, or Cloudformation. For this demo, use the console.

Use the following steps to deploy TGW.

It takes a few minutes for the TGW to become available.

Complete the following steps to configure VPC A:

a. Go to Transit Gateway Attachments on the left-side of the window and create a new attachment. Select the TGW ID you just created.

c. Select the VPC ID for which you want to create the attachment. In this case, choose VPC A.

d. Select all the subnets to which you want TGW to route traffic.

You must select at least one subnet and can select only one subnet per Availability Zone. 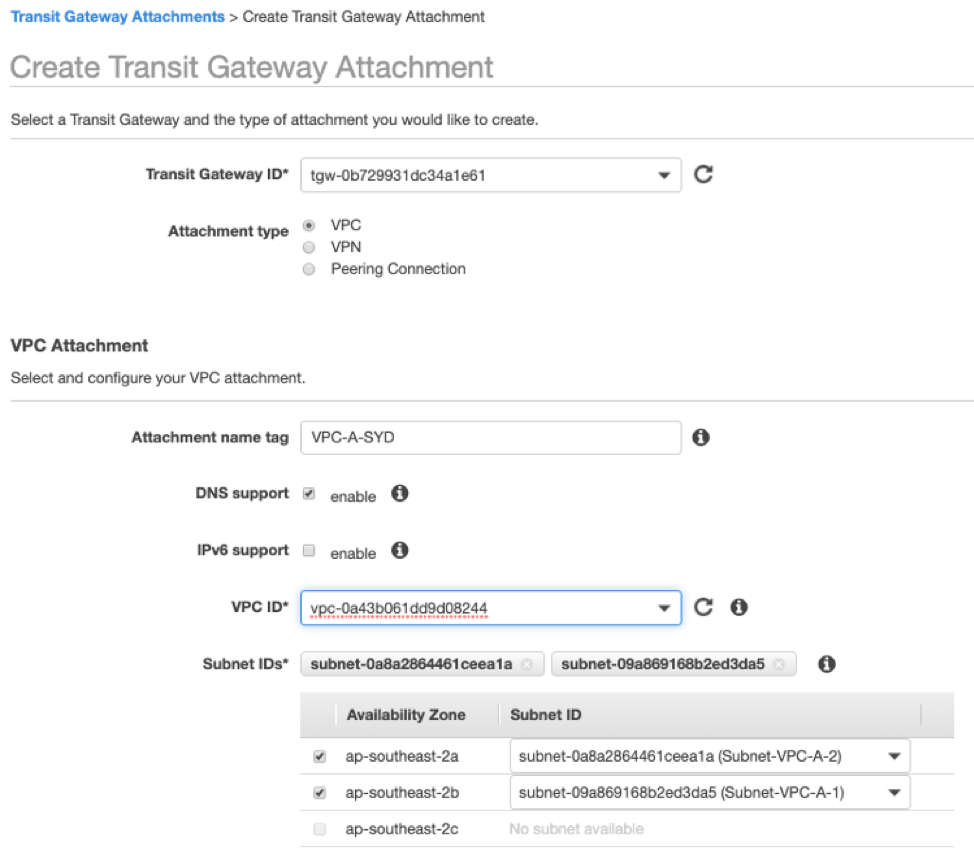 Create a second attachment for VPC B following the preceding VPC A steps for VPC B. You now have two TGW attachments.

Go to Transit Gateway Route Tables from the left-hand side to see the default route table. Notice two routes in the Propagation tab. Propagation occurred automatically based on the TGW you created in the first step.

Let's try and ping the instance in VPC B from VPC A. What happens?

Nothing happens because you still need to tell the traffic where to go after it enters the VPC.

For this, you need to add a route in the route table associated with the subnet where the EC2 instance is located. If you also want to ping from VPC B --> VPC A, you need to set the returning destination route back to VPC A.

The target is the TGW ID. 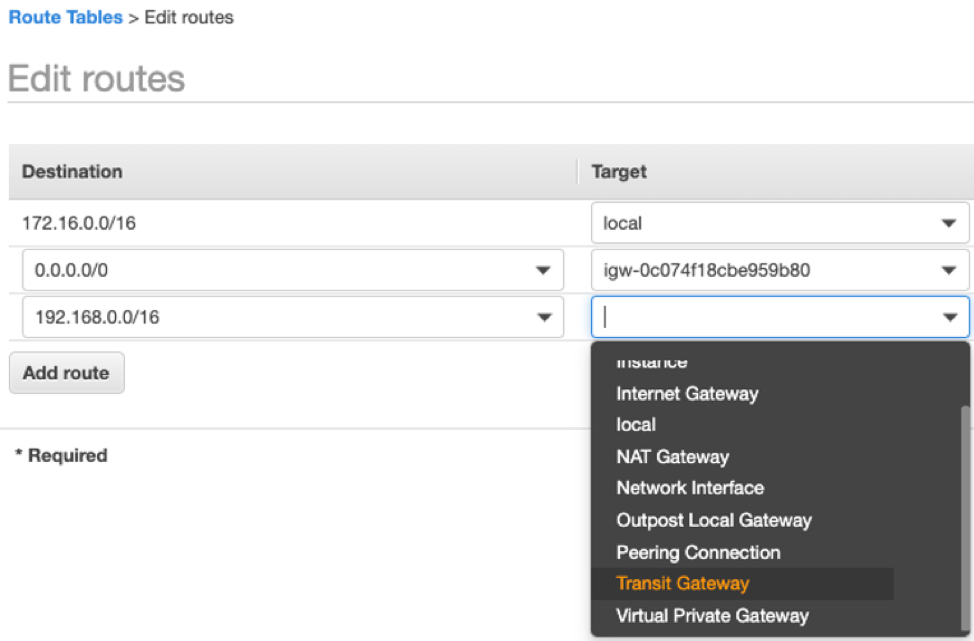 Now, run the ping test again, and you should get a response. Well done!

This completes the connection highlighted in green in the following diagram: 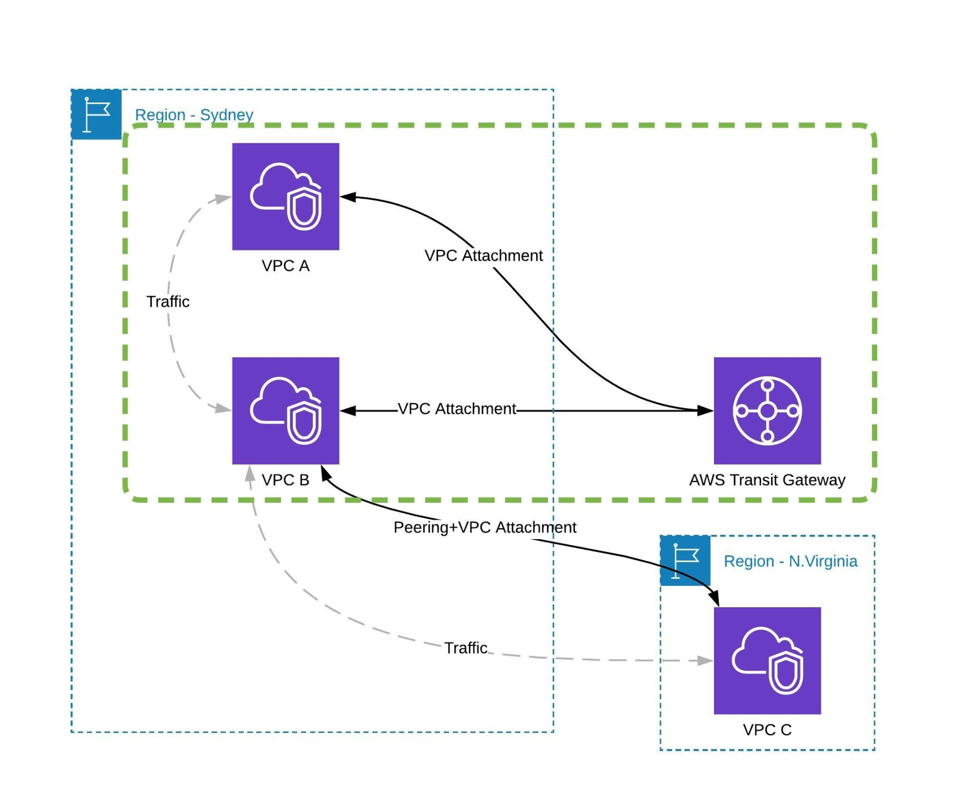 Recently, AWS introduced inter-region peering with TGW. To do this, you need to use the Peering Connection type to create a new TGW attachment to the TGW based in the second region, North Virginia. The following diagram shows the TGW ID I created for the outside North Virginia region in this demo: 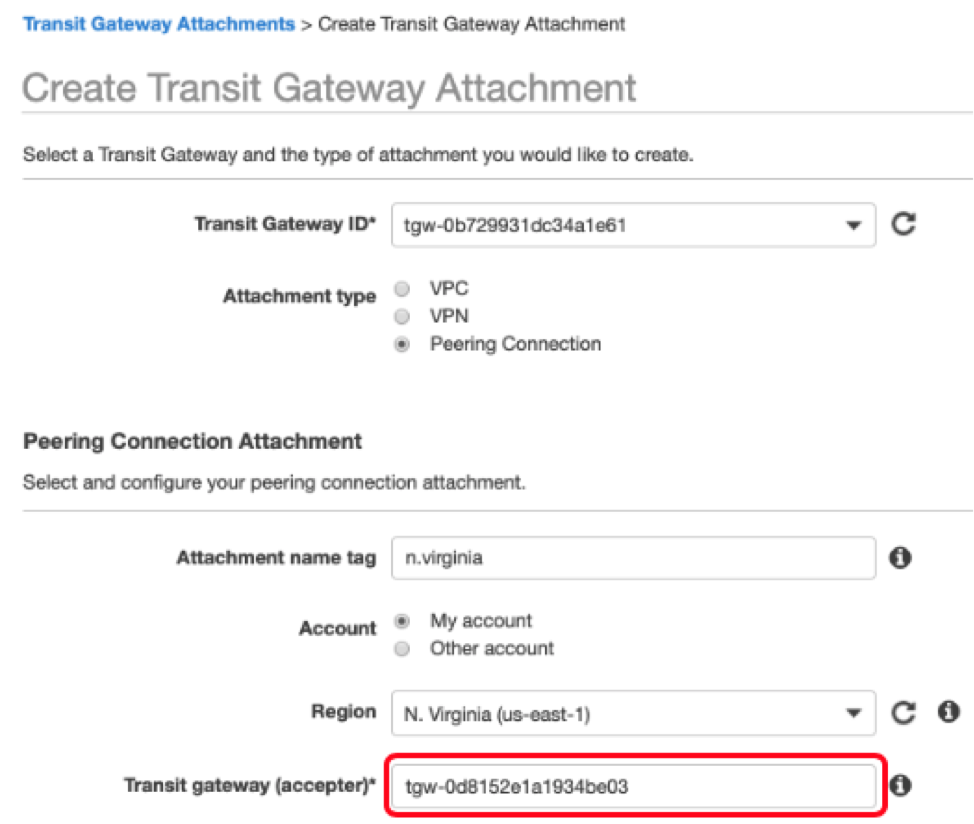 Go to the n.virginia TGW attachment console and notice a peering request in a pending state. Go ahead and accept the request.

You need to create a new TGW attachment for VPC C and VPC D in their respective regions with the attachment type: VPC.

The following diagrams shows the VPC C and D details: 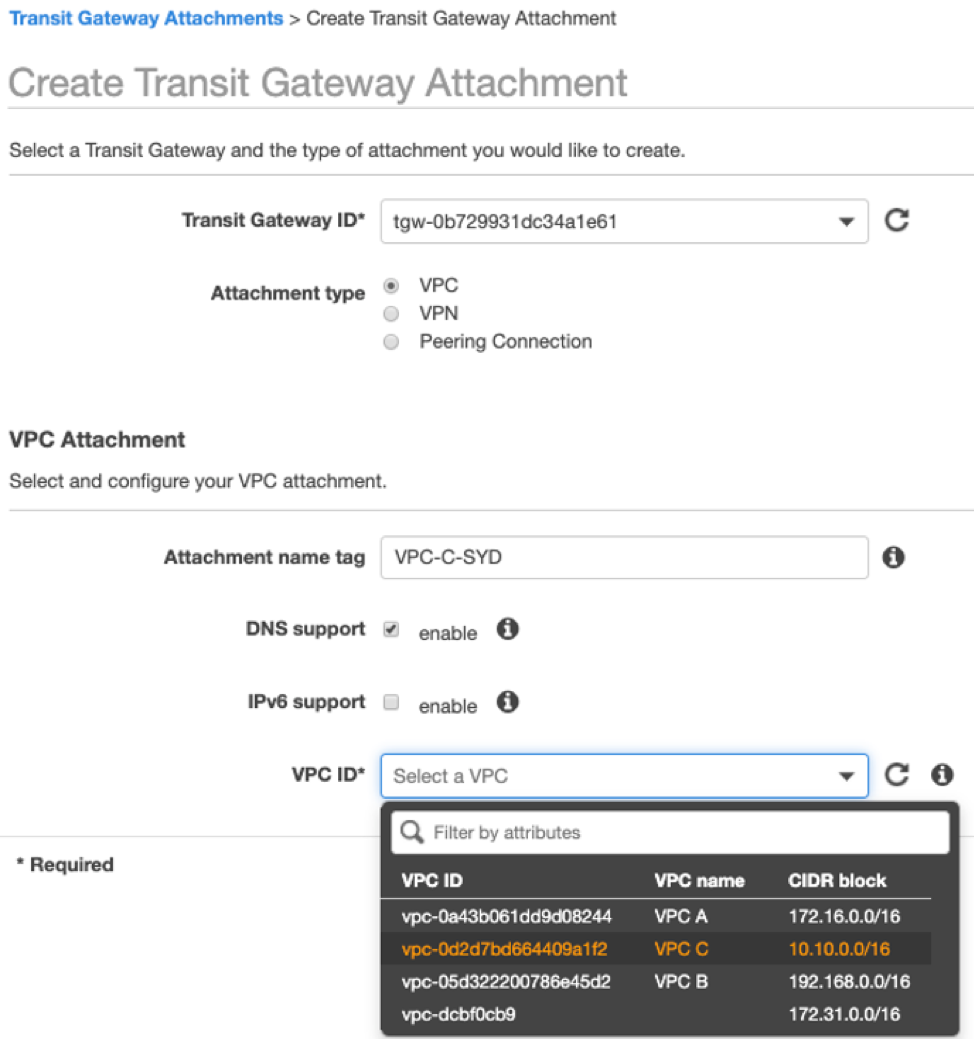 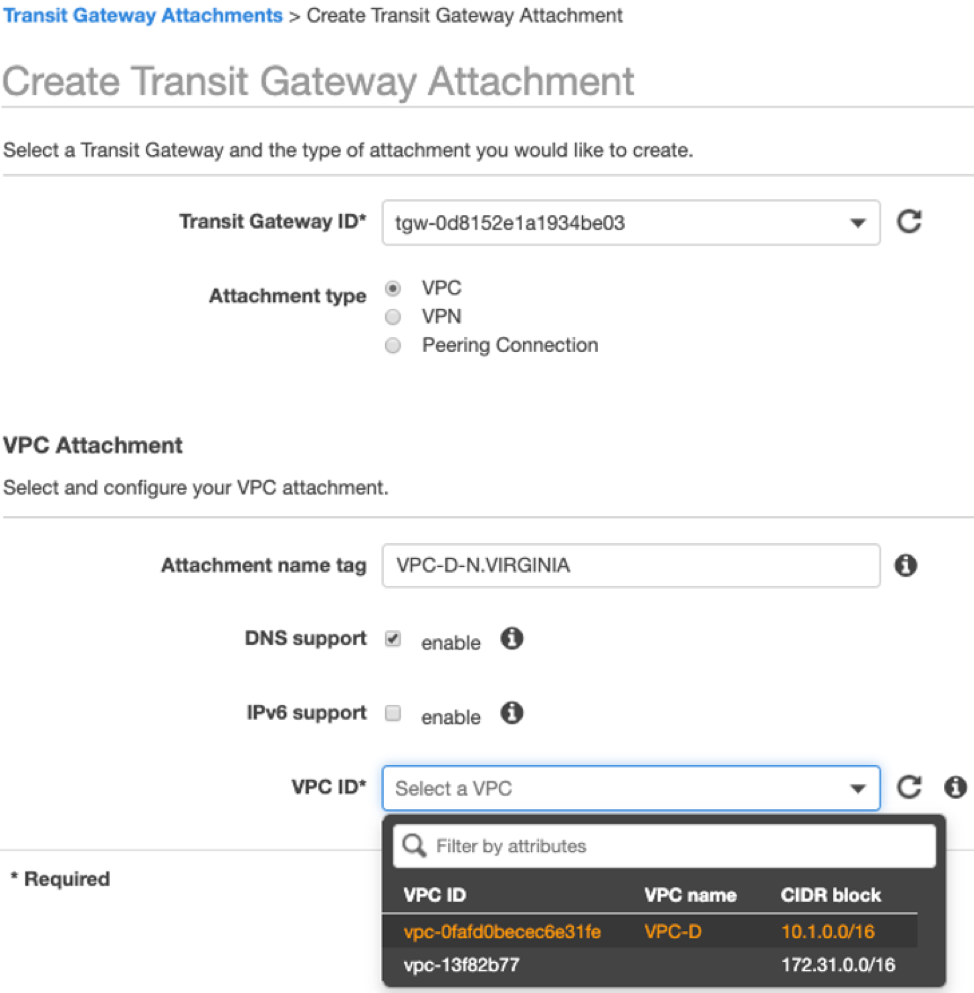 Use the following steps to configure the attachments:

a. Create an entry in the Sydney TGW route table to route traffic to the classless inter-domain routing (CIDR) range of VPC D in n.virginia region.

NOTE: Make sure to select the correct attachment that references the peering and not the VPC attachment type. 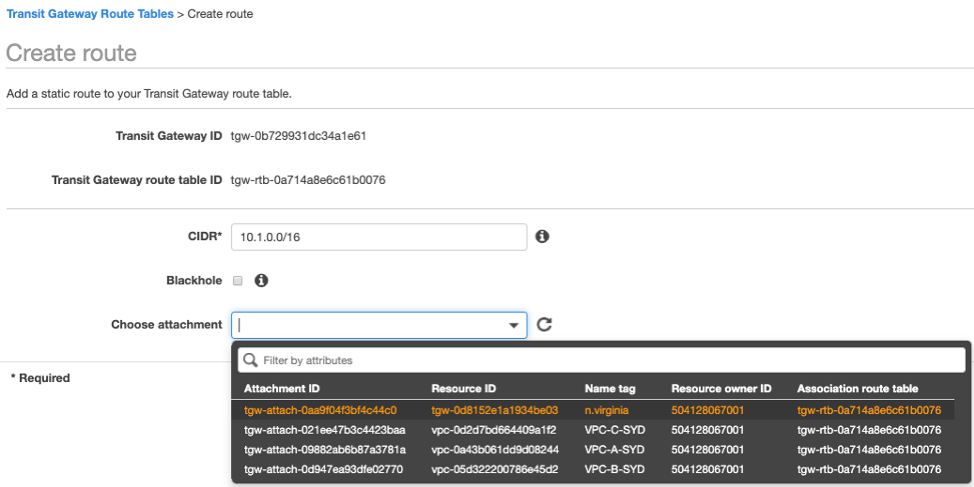 b. Do the same action in the n.virginia region to route traffic to VPC C.

To complete the setup, you need to add a route to the route table associated with the subnet in which the EC2 instance located. If you also want to ping from VPC D --> VPC C, you need to set the return destination route back to VPC C.

After you do that, if you ping from VPC C to VPC D, you should get a response.

If you are not getting a response, ensure that you opened security groups to accept ICMP traffic. If all else fails, take a look at the routes to ensure you configured them correctly.

TGW supports attachments for your direct-connect and site-to-site VPN. You can now create transitive networks, where previously you needed third-party appliances to manage all this.

TGW is a welcome solution to the AWS networking feature list. Furthermore, the addition of inter-region peering with TGW has made life that little bit simpler when managing multiple VPCs located in various regions around the globe.

Use the Feedback tab to make any comments or ask questions. You can also visit www.rackspace.com and click Sales Chat to get started.

Learn more about our AWS services.

Nilojan Tharmarajah
I am a Specialist Solutions Architect at Rackspace. In my younger days, I earned a degree in Information Systems from City University, London, United Kingdom. I have close to 15 years of technical IT experience in various industries, from maintaining data centers for multiple companies to deploying cloud infrastructure for a global media company. With my experience, I now help companies from various industries develop solutions for their environment in the cloud and act as a sounding board to advise customers on their technical challenges.