The Benefits and Architecture of a Sitecore UAT Environment

Where do you conduct your User Acceptance Testing (UAT) activities? It's a loaded question that many organizations have challenges addressing as they first need to obtain a clear definition of what what UAT is (and what it isn't) before they even consider where UAT activities should occur. The benefits of a properly instituted UAT environment far outweigh the challenges, and the danger of not having one, but success requires a thoughtful and purposeful approach.

User Acceptance Testing is intended to be conducted on a production deployable Sitecore site to ensure it meets business requirements. It should not be aimed at defect/bug identification and remediation,, but rather it should validate that the solution built meets the established requirements. To be clear on this point, any bug found during UAT indicates a failure in Unit, Integration, and System testing. Rather than push through "UAT" by patching defects/bugs, UAT should be stopped once the defects/bugs are collected and pushed back to development for resolution and review through the Unit, Integration, and System testing stages prior to re-conducting UAT. While this may seem extreme, failed code will continue to stack and turn UAT into a nightmare for testers, prolonging what should be a solution check into daylong, or even weeklong, bug hunting sessions, instead of reviewing functionality to ensure it meets the usability goals of the system.

UAT is especially critical for Sitecore applications where the public facing nature of a Sitecore site requires a thorough vetting lest a loss of visitors occurs due to a usability revolt. Additionally, developed features may impact the CMS interface, so it is imperative to develop a solid UAT plan both for public facing aspects and also for content editors and administrators.

If properly conducted, UAT yields many game changing benefits for organizations that embrace a strong testing paradigm. Some of the most common ones include:

The Use Case for a Dedicated Sitecore UAT Environment

Where UAT occurs is just as critical as how it is conducted. Across the spectrum of non-UAT conformity is testing in silos within development environments to testing in Production. Establishing a UAT environment that mirrors the infrastructure architecture of Production ensures that the complete solution can be tested as if it were live, without impacting the actual Sitecore site currently accessed by users (public and content administrators). This, combined with the benefits listed in the previous section, is all the rationale your organization should require to establish a dedicated UAT environment. The benefits, and conversely drawbacks, are simply too great to not embrace this paradigm.

Per managing the actual UAT environment, it should be cared for with the same level of focus as Production. This may include leveraging consolidated monitoring so UAT can be carefully analyzed, benchmarked, and compared the same way one might monitor a Production site as this will quickly uncover development issues.

Obtaining and maintaining a strong UAT environment is not without its challenges. Fortunately, most of these come down to "simple blocking and tackling" to ensure a "One to One" of UAT and Production. Others are more complex, such as stakeholder buy-in to construct the UAT environment. Common challenges include and are not limited to:

Successful UAT is part infrastructure, part governance. Creating a repeatable and sustainable UAT plan requires some structure but should not be overthought. While your UAT plan may differ, here are some sample steps to consider:

The following example offers a sample UAT environment that highlights the data connections and flows across a multi-region Sitecore Farm that mirrors a Production environment in its architecture. Notice that content is refreshed via the Production Master database over the UAT Master database (we will explore options to perform this momentarily). This assumes connections to external APIs that are dedicated to UAT and that it is using Sitecore xDB functionality with ObjectRocket as the MongoDB backend. 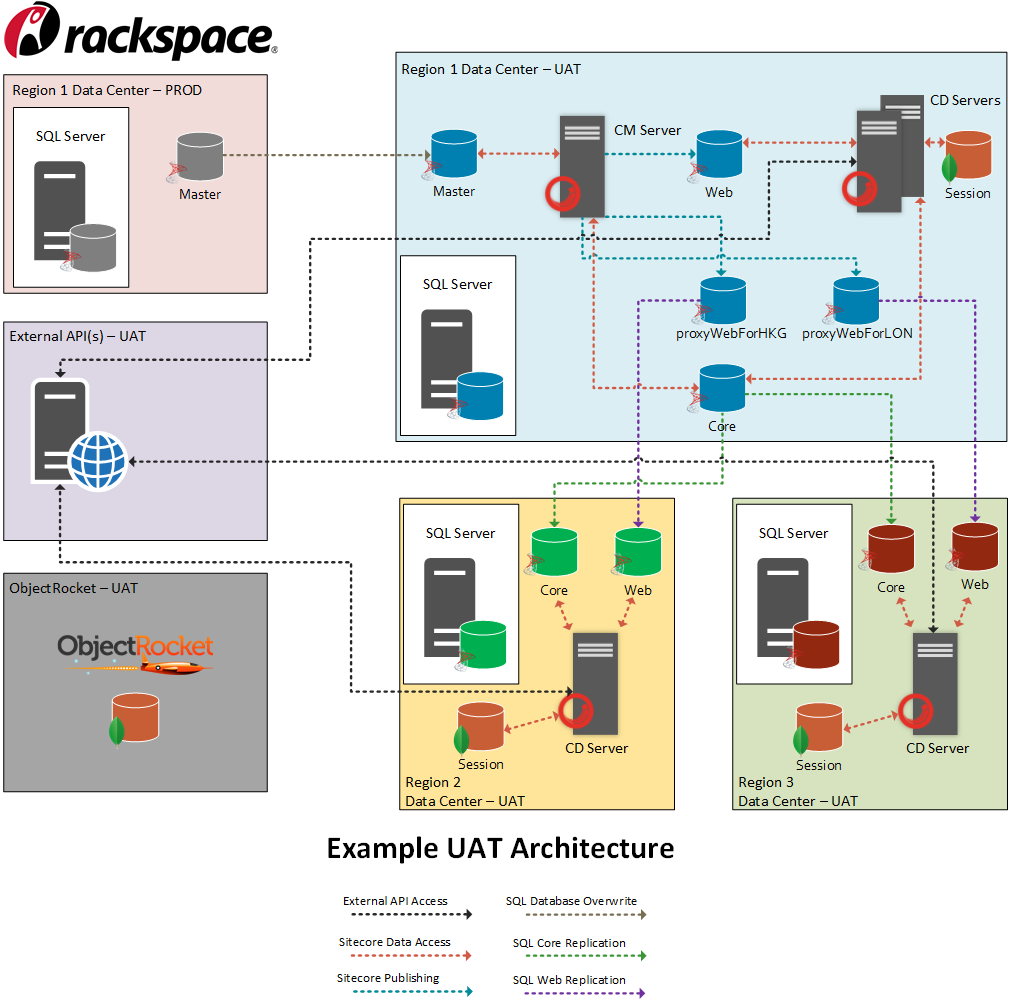 The process for refreshing the UAT environment is as follows:

It's Never Too Late to Establish a UAT Environment

So when is the right time to establish a fortified and governed UAT environment? The answer is now, not later, and you are not too late! Start by creating a roadmap that clearly details the business benefits, architecture, and proposed plan for managing UAT Testing in your dedicated UAT environment. In the very least you will have a strong business case to take to your stakeholders with the aim of moving your organization further down the DevOps path towards Continuous Deployment.

If the process of establishing your UAT environment seems overwhelming, you are not alone. Many organizations struggle with both the technical and governance implications of this paradigm shift. Rackspace guides clients through this process from roadmap to realization, working as a full partner to proactively help our customers uncover and resolve potential issues across their Sitecore implementation via a deep team of Sitecore experts.