In our previous [article]({% post_url 2018-04-20-Code-Dive-Openstack-Live-Migrations-Part-2 %}), we dove deeply into the Live Migration process by looking at how Conductor passes data back and forth between Scheduler and the Source and Destination Compute Nodes. We have found a host machine at this point and verified that all of our preliminary checks will pass.

We watched as the code finished the execute method and passed the information to compute_rpcapi.live_migration for the source compute. We’re skipping over the RPC (we should be pretty familiar with that by now), and picking up the code on the Source Compute Node. Before we continue, let’s go over our assumptions one final time.

Even though we went very deeply into methods during our last run through this code, very little of that data was retained. Essentially just a small bit of more information regarding the destination was placed into the migrate_data pack and is being sent along. The maps that we generated were lost, as all of these methods were simply running tests or throwing an Exception. When we head into the Compute Manager’s live_migration codebase, we are sending:

That’s a pretty simple list of information, and we should know what is contained in all of these details by now. The important fields here are that we have:

We have the instance ref and the host ref, which can be used by the code to pull things such as host_ref and vm_ref. When these varaibles are pulled, you generally see “instance”, “dest”, or “host” passed. Let’s pick up at the Compute Manager and get this server show on the road!

To begin, we start (as always) by transferring the RPC call into a private method. Some additional work is handled this time, however. Because this process can take a significant amount of time to run, we do not want RPC to be hung up waiting for the _do_live_migration method to return. Therefore, an Eventlet thread is spawned. This Eventlet thread continues to run, and RPC returns its worker to the pool. From here, _do_live_migration is essentially told to fork off and handle its business, and we continue into that method.

This is the beginning of the prep phase for the live migration proper. The migration status is set to Preparing, and because I’m running a block_migration, I gather details about the disk information and get basic BDM information again (remember, this information was discarded during the scheduling phase and only host details were returned). This very basic information is pulled and thrown into the pre_live_migration through computeRPC once again. I save the result of this as migrate_data. Note here that I actually pass the current migrate_data (which was once the dest_check_data), so the variable is overwritten with the returned result of pre_live_migration method. Let’s look briefly into the get_disk_info method here for clarity. Once the pre_live_migration method finishes, we return to this method to continue.

This is a case where XenAPI actually doesn’t implement this work, but it just passes the check, relying on this to be done later.

This method handles a decent amount of complicated work. First, it pulls the more complete Block Device Mappings including the Cinder Target information and uses that information to set up attachments for the volumes within the _volume_API. It then pulls networking information again, and it passes the data into the driver’s version of this method (pre_live_migration) to handle the heavy work. The result of the driver’s pre_live_migration call is saved as migrate_data. Once completed, execution moves on, sets up any needed networks on the host machine, and sets up the filtering rules before returning migrate_data. The following code has been significantly trimmed for clarity. Notice that migrate_data is passed and overridden, and that the code is running on the destination.

The following simple method just adds more data to the migrate_data object. The volumes are connected on the destination hypervisor by passing the bdm information, which was gathered in the previous method, into connect_block_device_volumes. This code delves deeply into Cinder, but we don’t need to focus on that right now. Just know that they are now attached on the destination. The code also creates interim networks and that the SR Mapping and VIF mapping for both of these are stored in the migrate_data field.

There is now even more data in the dest_check_data (or migrate_data) field. The destination information is there now that networks have been set up, filtering rules are in place, volumes have been attached, and that modified migrate_data is passed all the way back to nova.compute.manager._do_live_migration on the source. Let’s look back, statrting where we left off.

Now that the pre_live_migration method has completed, execution moves on (which leaves us just a status change away from a “running” status (YAY!)) and into the driver’s live_migration code. Nothing is returned from here, and it is just a try: and except: block execution. From here, the driver handles the rest of the process.

The name of the following method actually changes a bit on the way into the driver for XenAPI, so it’s a bit confusing. We are getting really close to the end here and have come a monumental distance in these code lines. Now, it’s time for the driver to go ahead and start doing its thing. The method gathers some basic data once again, because often the needed data is not returned. The method then fills in even more data in migrate_data and issues the XenAPI Migrate command! This means that XenAPI begins the mirror, and the process is legitimately kicked off. This process handles getting the VM started on the destination, transferring the RAM states, and so on. This just leaves the OpenStack drivers to do the cleanup. More comments are inline in the following code. Once the long, long migrate_send command completes, the post_method executes. 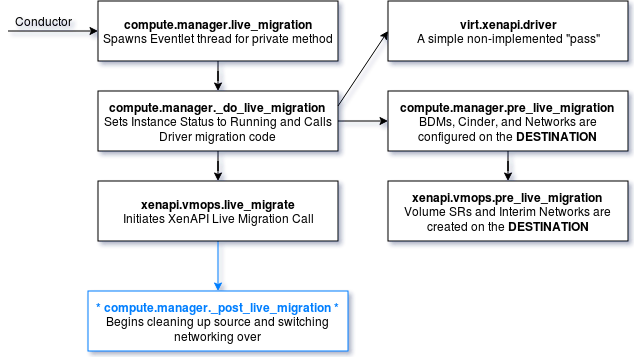 Remember that the execution didn’t move through RPC to get here, so the code is still running on the source. So far, execution was transferred to RPC to only handle the destination checks before bouncing back to source again. From now on, code runs on the source. The following method handles the cleanup actions that need to be done. It gathers BDM records (again!) and terminates and detaches the volumes from the source hypervisor, preparing to switch around networking information. This method gets very long, so we’ll walk through it a little at a time and follow its cleanup steps where applicable. More comments are inline in the code. 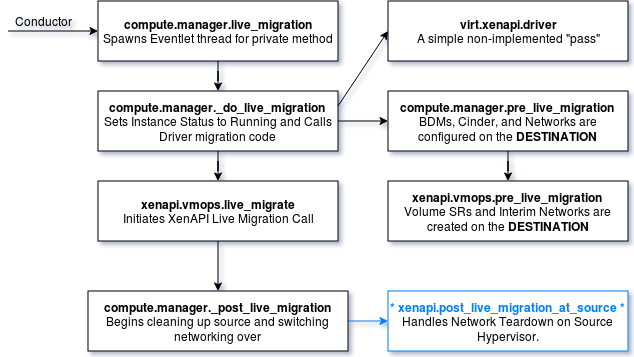 In the following code, the vif connections for the VM on the source are deleted, effectively stopping any connectivity to the source. This traverses two methods, so let’s take a look at both. The first method just calls _delete_networks_and_bridges. This method then calls the vif_driver to call delete_network_and_bridge. Kind of a long way around to get to the work, but you can see the vif_driver defined here as well.

Looking at a sample nova.conf, notice what that CONF.xenserver.vif_driver value is. Depending on the type of networking used (OpenVSwitch, Linux Bridges, and so on), this leads to different classes. Let’s use OVS, for example. 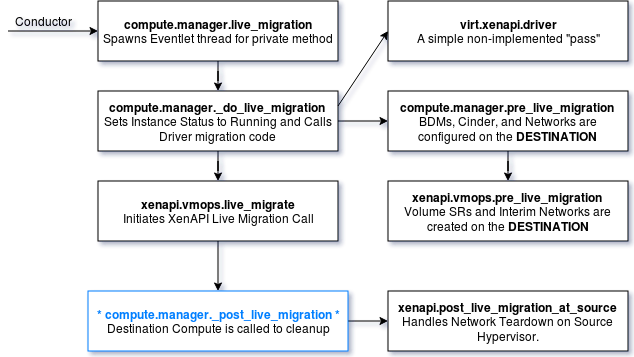 The nova.virt.xenapi.vif.XenAPIOpenVswitchDriver.delete_network_and_bridge method is very intense and again out of our scope, but feel free to look at this code on your own. It destroys the OVS port bindings for the bridge, vif, and patch ports, and tears down the rest of the environment for routing to this VIF. Now that’s done, let’s look back at the Compute post_live_migration with a bit more code trimming. I’ve marked where left off with (X) in the following code.

Beyond the (X), you can see that now some cleanup is being handled on the destination. Notice that it passes through compute RPC now. As you might expect, destination cleanup runs on the destination. Note that even if this fails, the line of code does not fail. On an except, we set a variable that it failed and move on. This causes the process to fail completely, but the code ensures that things are cleaned up in the proper order instead of just crashing. 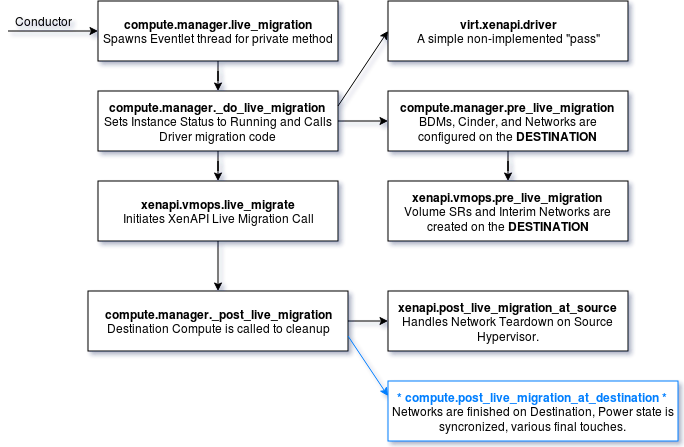 The following is another beefcake of a method, which handles actions on the destination and also reaches out to the source to tear even more information down. I added more comments inline so that we can keep our (read: my) thoughts straight. 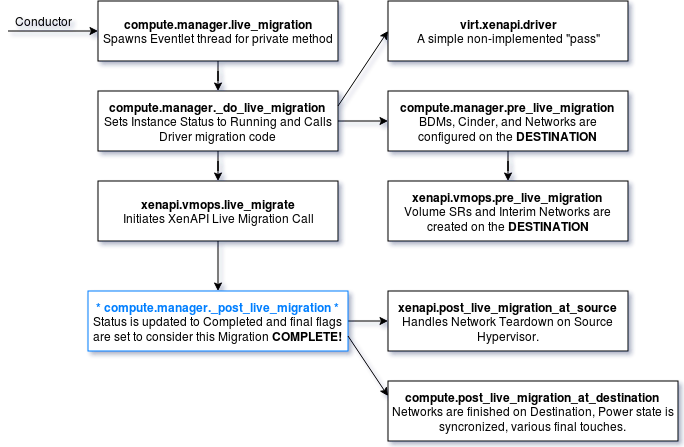 Now we can return to _post_live_migration again, with more trimmed down psuedocode in the following sample to see where we left off marked with an (X).

The previous process essentially completed the migration. As far as the database is concerned, the task_state is empty, so this thing is no longer running. The instance points to the new host in the database, and instance.host = self.host (set from the destination). The remainder of the code is handling the last of the cleanup and ending the process completely. Comments are inline.

We have now completed the full trace through the live migration process, while also taking some time to look at and understand how the RPC services are used to communicate back and forth between services. We started out in the Nova API service and quickly bounced between Compute API, Conductor, Scheduler, Destination and Source Compute and Hypervisor, Neutron, and many others. While some of these were a bit too difficult to cover in this series of articles, you can use this same logic of moving through the code piece by piece to investigate any process, failure, or stack trace that you may receive. I encourage readers to use this information to dive deeper into the codebase to explore areas that interest them and that we did not cover this time. For example, within the Scheduler codebase, OpenStack uses interesting “Abstract Base Classes” (to handle scheduling efforts) and some very complicated and confusing rules that can be fun to explore. Neutron itself is a complicated beast, and understanding it better can be very valuable.

Remember that this was not written by a professional writer or developer, but just a Racker with a passion for Openstack. I hope you’ve enjoyed this code dive and gained some knowledge, and hopefully I’ll return soon with a new process to explore!